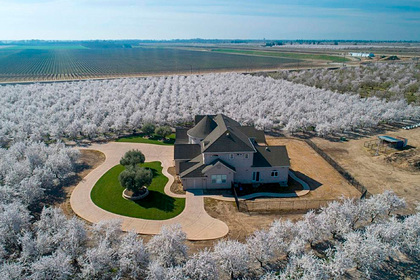 »Justin Roiland bought a home in the agricultural town of Ripon, California. The estate is actually located in the middle of the field, and the area around is planted with almond trees, according to Dirt.

The scriptwriter paid two million dollars (almost 150 million rubles) for the estate of four hectares. The object is considered one of the largest and most expensive lots in the city. The place is located almost 50 kilometers east of San Francisco. At the moment, it is not known what exactly prompted Royland to buy housing in this area.

The scriptwriter had a mansion of 560 square meters, built in 2005, at his disposal. A long access road leads to it, along which hundreds of almond trees are planted. The house has five bedrooms, four bathrooms, a kitchen connected to the living room and a sports training area. A special feature of the building is a round staircase. There are also two garages adjacent to the house – for three and four cars. There is a lawn in the yard, and besides almonds, olive trees are also planted. The size of the territory allows you to equip a swimming pool.

Earlier, the portal reported that the American television scriptwriter, one of the creators of the series “Gossip Girl” Josh Schwartz got rid of his home in California Santa Barbara. He sold the property for more than $ 8.9 million. Schwartz, together with his wife, owned the mansion for five and a half years.