19FortyFive: Ukrainian tank “Oplot” will not be able to influence the course of the battle 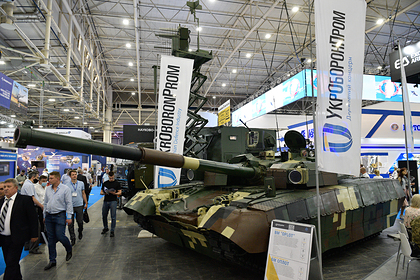 The capabilities of the Ukrainian tank forces were assessed in the USA. The most modern Ukrainian tank “Oplot” will not be able to influence the course of the battle. This is the conclusion reached by 19FortyFive columnist Brent Eastwood.

The publication notes that Ukraine needs a tank to maintain its defenses. The T-84U “Oplot” could become such a machine, but its small number will not allow revealing the positive aspects of the tank. The author notes that several Oplots are at the disposal of the Ukrainian military.

Eastwood emphasizes that the T-84U is based on the Soviet T-80 tank. The Ukrainian modification received a welded turret, new ERA and a 1200 horsepower 6TD-2 diesel engine.

The main gun of the Oplot was the KBA-3 smoothbore cannon, which is an unlicensed copy of the Soviet 2A46 cannon. The author of 19FortyFive notes that the Ukrainian tank's fire control system causes insufficient accuracy and firing range.

In October, Malyshev Plant prepared one Oplot for dispatch to the United States. The Ukrainian car was ordered in 2018. The Pentagon “Oplot” cost seven million dollars.

In August, BM “Oplot” broke down during a rehearsal of the parade for the Independence Day of Ukraine. The crew was unable to repair the tank, so the Oplot was taken away by an evacuation vehicle.