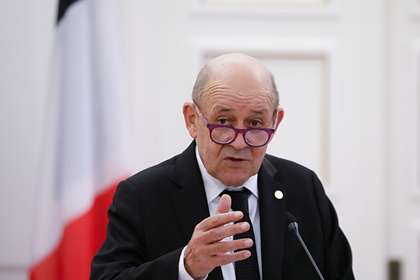 French Foreign Minister Jean-Yves Le Drian at a meeting with NATO foreign ministers plan to discuss how to return to joint work with Russia on arms control. His intentions were announced by a representative of the French Foreign Ministry at a briefing on November 29, TASS reports.

He stressed that Le Drian will convey to his colleagues the content of the dialogue that took place on November 12 between him and the Russian Foreign and Defense Minister Sergei Lavrov and Sergei Shoigu … “The Minister will emphasize the need to resume joint substantive work with the Russian Federation on the parameters of the arms control framework,” the French Foreign Ministry spokesman said.

the background of “significant tension” around Ukraine. Le Drian will also set out the position of Paris on the mutual strengthening of the defense of European countries.

Earlier, the French Foreign Ministry already spoke about the desire to work together with Russia and NATO on arms control. Also in Paris, they noted the gradual erosion of the framework of arms containment and expressed a desire to correct the consequences of this process.