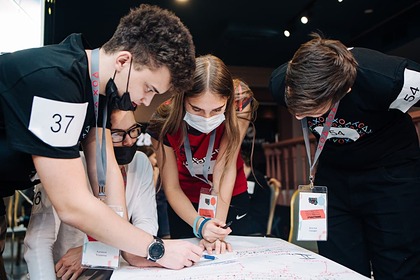 All-Russian competition “Your Move” of the presidential platform “Russia – the country of opportunities”. It was attended by 1,000 students from 76 regions of Russia.

“The competition brought together a huge number of participants – more than 568 thousand students from all regions of the country, and this is so cool! Finalists from 76 regions of Russia are in this hall today. You are all incredibly talented, cool, and dedicated. An interesting finale awaits us and a lot of further joint work to implement your ideas and initiatives, ”said Grigory Gurov.

“The project was launched for the first time this year, but it has already become one of the most massive competitions of the Russia – Land of Opportunities platform. The competition for getting into the finals was almost 600 people per seat! In addition to the finalists, representatives of leading institutes and universities, as well as partners of the competition, who will hold lectures, workshops and laboratory tests for the participants, have gathered at the site, in the Sirius Park of Sciences and Arts.

Maxim Dreval called the Tvoy Khod competition an excellent platform for the most motivated and ambitious students in the country. The participants had a new opportunity to hone their skills and get support for their initiatives.

“And the Knowledge Society provided a lot of useful information and tools for the implementation of student projects. The task of such competitions is to teach how to try and make mistakes, and despite this, continue to move towards the goal, “- said Maxim Dreval.

Vladimir Solodov recalled that Russia is a huge country and wished the participants the courage to discover it.

The final of the All-Russian competition “Your Move” will last until November 29. Experts will evaluate students' soft-competencies and team solutions.

According to the results of the competition, 200 winners will be named, who will receive prizes in the amount of 1 million rubles. These funds can be used for training, launching a startup or improving housing conditions.