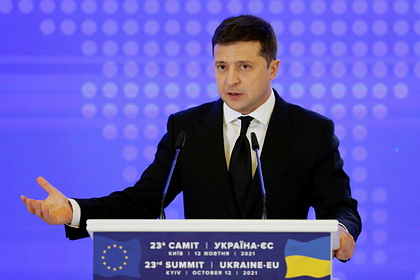 According to the head of state, he was informed that businessman Rinat Akhmetov was involved in the upcoming coup, and billions of dollars were allocated for this. At the same time, the Ukrainian leader noted that he himself did not believe in a coup d'etat and that an entrepreneur was involved.

The politician believes that Akhmetov's entourage is trying to drag the businessman into a war with the Ukrainian leader and the state.

Akhmetov said that the words about his involvement in the attempt to carry out a coup d'etat in the country are an absolute lie. The businessman noted that he has always strived to work for the good of an independent, democratic and whole Ukraine with Crimea and Donbass in its composition.

I am outraged by the spread of this lie, regardless of what motives the president is guided by

According to Akhmetov, in the future he also intends to protect freedom of speech, economy and democracy in the country and fight authoritarianism and censorship./p> Russia's reaction

The first deputy head of the Duma committee for CIS affairs, Eurasian integration and relations with compatriots Viktor Vodolatsky, in turn, noted that the statement of the President of Ukraine about the attempted coup in the country is yet another fake. He stressed that the Kiev authorities cannot decide who to put “at the forefront” – Russia or Akhmetov.

According to Vodolatsky, the news about the coup in Ukraine was based on the situation in Kyrgyzstan, where a coup was averted.

In general, another nonsense, another fakes, another anti-Russian agenda, which is probably already boring for everyone

Viktor Vodolatsky, first deputy head of the Duma committee for CIS affairs, Eurasian integration and relations with compatriots A tricky move country. According to the expert, in the event that reliable information is received about an impending coup, there are arrests first, and only then there are speeches at press conferences.

I will assume that he decided to postpone the Russian offensive a bit, to unleash the Akhmetov coup in order to shout later that the homeland is in danger, and the horses in the crossing are not being changed

Zharikhin suggested that Zelensky's loud statement may also be related to rumors that from December 1, the president intends to introduce martial law in Ukraine. The political scientist noted that a coup d'etat is an excellent reason that can justify such a serious measure.

Former head of the Ministry of Internal Affairs of Ukraine Arsen Avakov said that Zelensky's words about the impending coup d'etat in the country with the participation of Akhmetov led to a drop in the shares of all Ukrainian companies … According to him, the losses were felt not only by DTEK (Donbass Fuel and Energy Company), owned by Akhmetov, but also by all Ukrainian companies.

We have a problem in the energy sector – we are walking on a thin line. We have financial problems. And at the same time, the president on the air allows himself to attack big business. Not many of you understand, but at that moment in two hours the shares of all Ukrainian companies on the London Stock Exchange fell very seriously

Arsene Avakov, the former head of the Ministry of Internal Affairs of Ukraine

The politician stressed that the press conference of the Ukrainian leader damaged the image of the state, as a result of which the country “lost billions in two hours.”