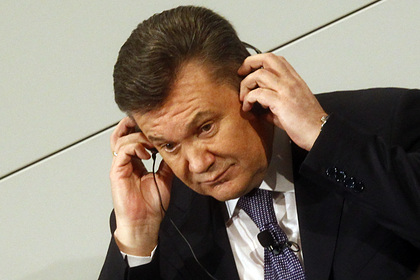 for the Ukrainian presidential chair. Yanukovych filed a lawsuit with the District Court of the city of Kiev with the requirement to recognize illegal the decision of the Verkhovna Rada on his “self-elimination”. The new process with the participation of the ex-head of state was announced by his press secretary Yuri Cuirassier.

“The fourth president intends to challenge the legality of the parliament's adoption of a resolution on his alleged self-removal from the post of head of state. This is an unconstitutional decision taken by some MPs in the euphoria of confidence in their impunity, while others – in fear of rabid armed radicals, “Cuirassier wrote on his Facebook page.

The price of lack of will Six years ago, Yanukovych fled to Russia. Why did he lose power and doomed Ukraine to bloodshed? 00:01 – 26 November 2020

“I am a Ukrainian of the second grade” The recruiter of the “Right Sector” is in a Russian prison. What does he think about Russophobia and the Maidan?

A representative of Yanukovych said that his side views the Rada's decree seven years ago as a coup d'etat against the democratically elected president of Ukraine. According to Cuirassier, this decision plunged the country into disaster, led to the loss of Crimea and Donbass and the transformation of Ukraine into the poorest state in Europe.

Journalists are already asking about the legal consequences of Yanukovych's lawsuit. “If the decision of the Verkhovna Rada on the removal of Yanukovych from power is recognized by the court as illegal, then there will be a legal conflict – and who is the president in the country? Zelensky or Yanukovych? ” – wrote in one of the Telegram-channels.

Earlier, Yanukovych's lawyer Vitaly Serdyuk appealed to the current President of Ukraine Volodymyr Zelensky with a demand to stop the persecution of his client. According to Serdyuk, charges of high treason against Yanukovych are politically motivated.