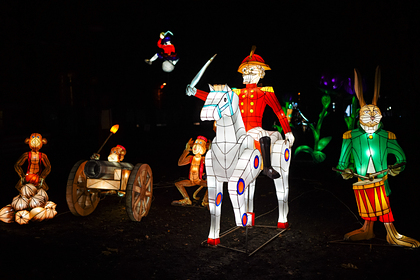 On the streets of Kaliningrad as part of the Old Europe lantern show “Glowing sculptures appeared. RIA Novosti reports.

Residents and guests of the city will be able to take photos next to the characters of famous children's fairy tales – the Nutcracker, the Snow Queen and others. A total of 250 different statues have been installed, united in 25 thematic installations.

Near each exhibit there are plates with QR codes that can be scanned with a smartphone and listen to a fragment of a literary work.

The show will last until January 16. You can admire the fairy-tale figures on weekdays from 6 pm to 10 pm, on weekends – from 5 pm to 10 pm.

Earlier in November, the Kaliningrad Cathedral became a laureate of the International Culture Online Prize. He received a special prize from the Russian Cultural Foundation for the “Cathedral: Hidden Signs, Secret Doors” VR tour. The tour allows viewers to explore the most interesting places of the cathedral, learn about the historical characters associated with it.