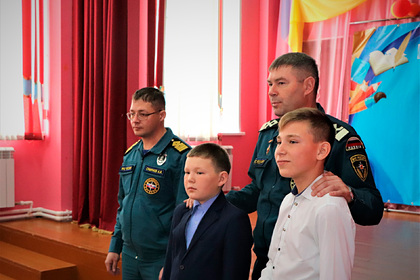 Employees of the Ministry of Emergency Situations awarded a Buryat student who saved a friend who fell through the ice. This is reported by REN TV. Rescuers came directly to Nikita's lesson and thanked him for saving the man.

The boy said that his third-grader friend decided to go ice skating and fell through the ice. He himself did not manage to get out, and the depth of the river in this place reaches two and a half meters. Nikita heard the screams of a comrade and decided to act as he was taught in OBZH lessons. First, he crawled on his knees, and then lay down on the edge of the hole and pulled out the child.

Nikita was handed a certificate. He is also waiting for a departmental medal, which is almost ready and the documents for presentation are drawn up in the Ministry of Emergency Situations.

Earlier it became known that in the Krasnoyarsk Territory a man survived a bear attack, crawled eight kilometers through the taiga and escaped thanks to a note.