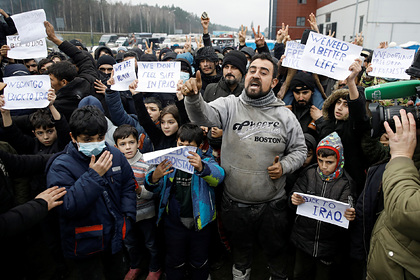 them to the European Union (EU). BelTA informs about the events near the Polish-Belarusian border.

According to the newspaper, the migrants rebelled against returning to Iraq and declared their firm intention to get to Germany through Poland. “We are not crazy, as they say about us! We are not terrorists. We are people! Children are with us. We want a better life! ” – said one of the natives of Iraq. Dissatisfied illegal immigrants assured that they are ready to wait for the humanitarian corridor in Germany as long as necessary.

At the same time, RIA Novosti, citing the Iraqi Foreign Ministry, reports that in connection with what is happening in Bruzgi, an export flight for Iraqi refugees from Minsk to Baghdad was postponed indefinitely.

The migration crisis on the border of Poland and Belarus escalated on November 8, when thousands of citizens of the Middle East gathered on the border with Poland and Lithuania, trying to enter the territory of the European Union … The West believes that Minsk deliberately organized this situation.

Against the background of the aggravation of the situation, Acting Chancellor of Germany Angela Merkel held talks with Belarusian leader Alexander Lukashenko. He suggested that she create a humanitarian corridor for two thousand refugees, and the remaining five thousand people were supposed to be sent home. Berlin and Warsaw rejected this proposal.