“URBAN-fresco”: graffiti with Dostoevsky was painted over in Kuznechny lane of St. Petersburg 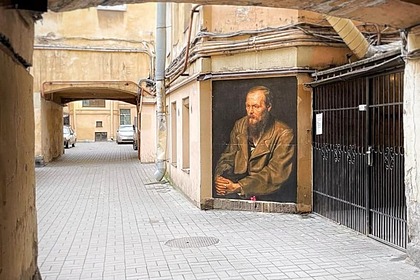 In St. Petersburg, where graffiti was painted a portrait of the Russian writer Fyodor Dostoevsky was depicted. The URBAN-fresco team on their Instagram reports that the city has gotten rid of the image.

According to the Podyem publication, the portrait appeared on one of the walls of the building in Kuznechny Lane in 2019. It was written by the creator of the urban-fresco technology Oleg Lukyanov. Before the bicentennial anniversary of the writer's birthday, which is celebrated on November 11, the graffiti was painted over. Lukyanov restored the work, but soon a similar fate awaited her.

The artist said that he did not plan to create graffiti again. He also does not know who exactly painted over the work, and noted that he gets the feeling that everything happens by itself. “There are no regulations allowing street art in St. Petersburg to exist at all. Who establishes these vile orders in the city? Nearby, for months, an advertisement for drugs hangs in the same arch, and for some reason no one touches it. When I came, I painted over everything around so that nothing would interfere with contemplation, “Lukyanov said.

In May, artists from St. Petersburg decided to create an association in Russia to legalize graffiti called the Party of Lovers of Absolute Beauty. At that time, they prepared documents for registration with the Ministry of Justice. In this way, the artists plan to contribute to the adoption of the law on the legal painting of buildings.