Dina Saeva pulled back her shorts, showing off her underpants, and surprised fans 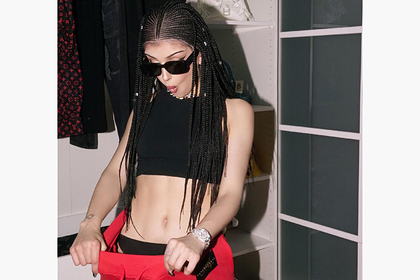 Russian blogger Dina Saeva, nicknamed the “Queen of TikTok”, shared pictures in a candid manner and surprised fans. The corresponding post appeared on her Instagram page.

The 22-year-old celebrity posted footage of her posing in a black crop top revealing her belly and bright red low-waisted sports shorts. She also wore sunglasses and sneakers, and put on bright makeup on her face. In the last photo, Saeva pulls back her shorts, thereby showing her panties.

Subscribers reacted ambiguously to the blogger's new publication and called it a provocation. “I miss old Dina”, “You're out of your mind.” “What did Dina see in the last photo?”, “Why provoke the audience?”, “What are you doing?”, “I was your fan, but you have changed a lot,” they complained.

At the same while other fans admired her appearance in the comments. “Pretty Woman”, “Fashionable Shorts”, “Coolest Blogger”, “Queen”, “Pretty Woman Dina”, “I Love You”, “As always the most chic,” “I love you,” users said.

< p> In October, Dina Saeva starred in a bikini that bare her breasts and caused controversy among subscribers. The celebrity starred in a shiny swimsuit made of rhinestones, exposing her breasts. The image of a girl lying in water was complemented by bright blue makeup and manicure. The posted images show that Saeva lies inside the ring of fire.