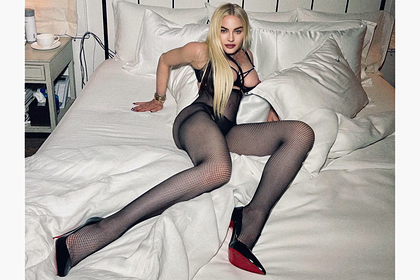 American pop singer Madonna shared new pictures in a candid way and pissed off her fans. The corresponding series of shots appeared on her Instagram page.

The 63-year-old celebrity starred in a black lace lingerie set, mesh tights, and patent leather heels. The photographer captured her in various poses. So, in some shots, Madonna lies on the bed, legs wide apart. In another shot, she demonstrates her bare breasts. In addition, the star climbed under the bed and showed her buttocks to the camera. Her image was complemented by a variety of bracelets, a cross-shaped pendant, a ring, and a leather lash.

The publication received more than 910 thousand likes. However, fans scolded the singer for being overly vulgar. “What kind of pornography?” Disgusting pictures ”,“ Abomination and vulgarity, no self-respect, ”they were indignant.

In October, Madonna lifted her skirt during the Jimmy Fallon show“ The Tonight Show ”. Discussing the promotion of a documentary on her Madame X concert tour, the musician stated that she expects to disturb the audience, then turned her back to the cameras and showed her underwear.