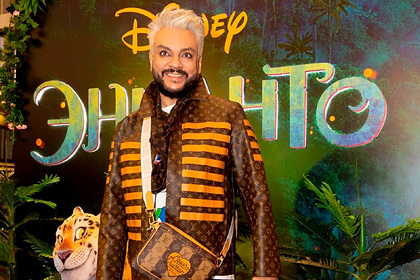 Russian singer Philip Kirkorov attended the premiere of the cartoon with children in the outerwear of the French fashion house Louis Vuitton for almost half a million rubles. He posted the photo on his Instagram account.

It is known that the event took place in Moscow's Zaryadye park. The celebrity came out with his daughter Alla-Victoria and son Martin. The paparazzi captured him in a white T-shirt, cargo pants and a Louis Vuitton leather jacket in brown and orange stripes. The cost of a similar thing on the brand's website is 435 thousand rubles.

In addition, Kirkorov appeared before photographers with a bag of the same fashion house with a monogram. The singer chose white sneakers as shoes. “Today we went to the premiere of” Encanto “(…) And our school friends have joined our company! They deserved going to the cinema for the fives, ”he signed the post, which scored 36 thousand likes.

In August, singer Philip Kirkorov attended the New Wave music award in an inflatable Louis Vuitton vest for 262 thousand rubles. The paparazzi captured the pop artist wearing the brand's monogrammed vest, the design of which resembles air-inflated pillows. The outerwear is made of transparent plastic and canvas.