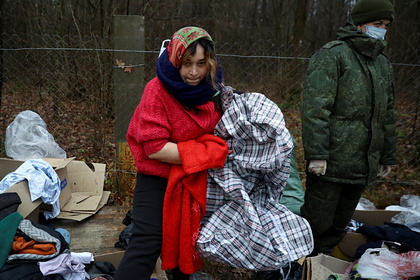 More than 200 illegal migrants forced their way into Poland and were returned to the border … This was announced by the official representative of the Polish Border Guard, Anna Michalskaya, RIA Novosti reports.

“They would rather die in Europe than return home” How migrants on the border with Poland changed life in Belarus alien. Europe has taken in millions of refugees. Why are they now hated, considered terrorists and want to drive them out?

Illegals entered the country on November 24 at about 19:00 (21:00 Moscow time) at the section of the border detachment in Cheremsha. “A group of more than 200 people forcibly forced the border, of course, with the active support of the Belarusian services. These persons were aggressive, they threw stones and tree branches at the Polish security forces, “Michalskaya said.

According to a representative of the border service, 230 migrants walked through Poland just a few meters before they were detained and returned to the border line. She added that seven illegal immigrants were left in the country.

“Five people were hospitalized. They needed medical attention and were exhausted. They have all kinds of scratches. We know that their condition is stable. Doctors say that within a few hours they will be able to leave the hospital, “Michalskaya said.

Previously, refugees in the logistics center staged a rally demanding to let them into the European Union (EU). The migrants rebelled against returning to Iraq and declared their firm intention to enter Germany via Poland. They emphasize that they are not terrorists and want a better life.