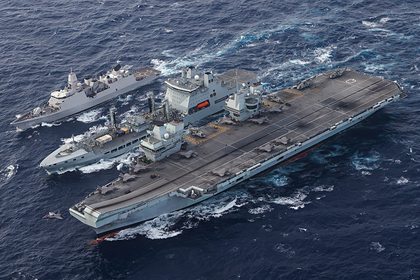 British Defense Minister Ben Wallace spoke about the interceptions of Russian aircraft. According to him, Russia used aircraft to spy on the carrier strike group (AUG) of the Royal Navy (Navy) of Great Britain, led by the aircraft carrier Queen Elizabeth. This was reported by the UK Defense Journal.

According to Wallace, Russian aircraft were tracking British ships in the Mediterranean. He noted that F-35 carrier-based fighters from the aircraft carrier Queen Elizabeth intercepted Russian planes taking off from Syrian airfields 30 times.

Earlier, the British Defense Department reported about the fall of the F-35 Lightning II fighter at sea. The plane crashed into the sea during scheduled flights from the aircraft carrier Queen Elizabeth. The pilot ejected and was rescued by the ship's crew.

In September, Russia placed five Project 636 Varshavyanka submarines in the Mediterranean for the first time. The submarines are armed with Kalibr-PL cruise missiles.

In July, Konstantin Sivkov, Deputy President of the Russian Academy of Missile and Artillery Sciences (RARAN), Doctor of Military Sciences, compared the capabilities of the British AUG with the Russian naval strike group ( KUG). He noted the range of Russian anti-ship cruise missiles.