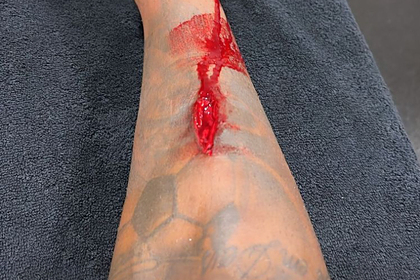 Zenit midfielder Wendel showed the aftermath of a collision with Malmo goalkeeper Johan Dalin in the Champions League group stage match. The photo was posted on the player's Instagram.

The photo shows an open wound on the player's shin, and part of his leg is bloody. “Today was the war,” wrote the 24-year-old Brazilian.

The episode in which Wendel was injured took place in the 50th minute. The Brazilian beat Dalin, who stabbed the Brazilian in the shin with spikes. The Zenit footballer earned a penalty, but Artem Dzyuba could not convert it. Wendel received medical attention, after which he returned to the field and played the match before the final whistle.

The meeting between Malmo and Zenit took place in Sweden on 23 November. The game ended with a 1: 1 score.