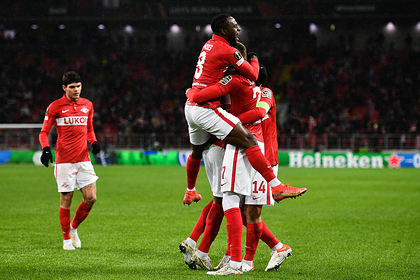 Spartak beat Italian Napoli with the score 2: 1 in the match of the fifth round of the group stage of the Europa League. This was reported by the Lenta.ru correspondent.

The meeting was held in Moscow at the Otkrytie-Arena stadium. In the first half, the hosts upset the Napoli goalkeeper twice. The double was designed by Spartak striker Alexander Sobolev. In the third minute he converted a penalty, and on the 28th he managed to take advantage of his partner's pass and sent the ball into the Napoli goal net with his head. In the 65th minute, the Macedonian midfielder of the Italians Elif Elmas closed the gap.

Having won, Spartak topped the standings in Group C. Like Napoli, the red-white team had seven points. Ruy Vitoria's team is ahead of rivals due to victories in head-to-head matches. Nevertheless, on November 25, Spartak may lose the lead if Legia and Leicester City do not draw.

The first meeting between the teams took place on September 30 in Naples. Then Spartak managed to win with a score of 3: 2: the red-and-white midfielder Quincy Promes scored a double.