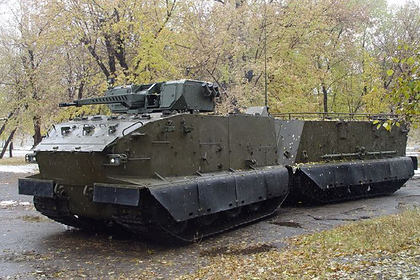 New pictures of the two-link armored vehicle for the DT-BTS have been shown in Russia. His images were published in the Krasnaya Zvezda newspaper.

The material dedicated to the holiday of the employees of the Main Armored Directorate of the Ministry of Defense of Russia was illustrated with photographs of promising equipment.

The publication noted that the snow and swamp transporter DT- The armored personnel carrier is designed for transportation and fire support of personnel in difficult climatic conditions. The machine is designed to work in the Arctic, Siberia and the Far East. Research has shown that a new fleet structure is needed to operate in the Arctic. The promising vehicles are based on the chassis of two-link tracked vehicles of the Omnipresent family.

In August, a member of the Military-Industrial Commission of the Russian Federation, Mikhail Osyko, spoke about the development of a mortar on the chassis of a two-link tracked vehicle. The self-propelled unit will be based on the DT-BTR.

In July, the tests of the DT-BTR were shown on video. The vehicle was tested at the 38th Scientific Research Testing Institute of Armored Weapons and Equipment. The researchers checked the protection of the crew when undermining and impact on the car with napalm.