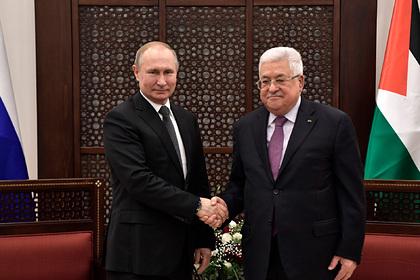 The head of the partially recognized state of Palestine Mahmoud Abbas said he was counting on the president's help Russia of Vladimir Putin in the organization of an international peace conference on the settlement of the Palestinian-Israeli conflict. The politician told RIA Novosti about this.

Abbas said he would ask the Russian leader to help revive the political process in Palestine. “We are confident in Russian support for our efforts in this direction,” the Palestinian leader added. He noted that he wants to “consult” with Putin and report to him on the latest developments in the region.

On October 25, the European Union announced that Israel was illegally holding territories on the West Bank of the Jordan River. Also in Brussels, they regarded the construction of Israeli settlements in this zone as an obstacle to reaching a bilateral agreement between Israel and Palestine.

The territories of the western bank of the Jordan River have been under the control of the Israeli army since 1967. Then these and some other lands were occupied by Tel Aviv as a result of the war with the coalition of Arab countries. Since then, Israel has been systematically building them up, populating them with its citizens.