General Mikhailov: Ukraine does not have enough resources for a war with Russia 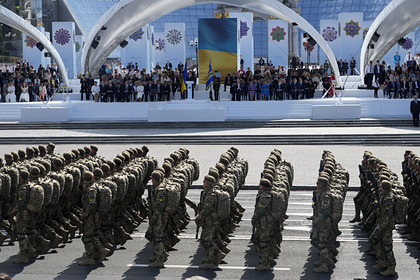 it will not have enough resources either in terms of weapons or in terms of the morale of the Armed Forces (AFU). So the possibility of a full-scale conflict between the countries was assessed by retired FSB Major General Alexander Mikhailov. In a conversation with “Lenta.ru” he added that NATO will not stand up for Ukraine, since, according to the charter, it protects only those who are members of the organization.

Western countries have promised to provide assistance to Ukraine in the event of a military offensive by Russia, said the secretary of the National Security and Defense Council (NSDC) of the republic, Alexei Danilov. In fact, according to Mikhailov, a full-scale military confrontation is unlikely for several reasons. First, according to him, Russian President Vladimir Putin will never take the first step in this direction. Secondly, NATO will not stand up for Ukraine.

“Putin, by definition, will not take such a step,” Mikhailov is sure. – As for the deployment of troops on the Ukrainian borders, this is exclusively our business: if we feel a threat, then we have the right to deploy exactly as much as we consider necessary. But, again, from the point of view of geopolitics, there can be no talk of any Russian invasion of the territory of Ukraine. ”

In many respects, the blame for the aggravation of military rhetoric, according to the expert, lies with the Americans, who are bringing the offensive weapons closer to the Russian borders. Russia is acting in a mirror-like manner, sending troops to where there is a high probability of suppressing a potential attack.

“Americans speculate on everything. In general, I have big doubts about the adequacy of American analysts – many times they have already passed the puddle with their forecasts. At the same time, their forecasts excite the society and European politicians very much, – said the interlocutor of Lenta.ru – Of course, if Ukraine starts aggressive actions against our country, a certain conflict is possible, but I still think it is unlikely. For this, Ukraine must accumulate the appropriate resources, which now it does not have at all. Its equipment, weapons, and the morale of the Armed Forces do not meet the requirements for offensive movements. But all these resources should be five times more than the enemy's. ”

Ukraine hopes to use the help of NATO countries, but Mikhailov is convinced that the allies will never take such a step, primarily because the country is not a member of the organization. And no one plans to accept it there.

“The NATO Charter states that countries on whose territory there are internal conflicts cannot be admitted to the bloc. That is, as long as there is a confrontation in the Donbass, Ukraine will not get into NATO. The organization can only defend its members, therefore it is hardly worth hoping for special support, “the expert concluded.

Earlier, the head of the Main Intelligence Directorate of the Ministry of Defense of Ukraine Kirill Budanov said that Russia would attack in late January or early February , for this, 92 thousand troops are already concentrated on the border.