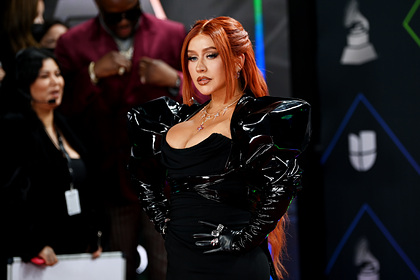 American singer Christina Aguilera attends the 2021 Latin Grammy Awards dress with a deep cut. Photos of her are published by the Daily Mail.

The 40-year-old celebrity appeared at an event in Las Vegas in a custom-made Vivienne Westwood velvet maxi dress, which is decorated with long vinyl lantern sleeves and a semicircular neckline. She also wore sandals, a cross necklace and some rings. In addition, Aguilera's face was brightly colored.

Aguilera's breasts became a topic of discussion among netizens, whose comments appeared under the material. “She was a natural beauty with small breasts. These implants are too big for her figure “,” Why do her implants look square? ” Hayek also caught the attention of users. The 55-year-old actress attended the premiere of The House of Gucci in a Gucci suit, which was a blue velvet top with a geometric neckline, paired with a long black skirt with a slit and a train. “Her breasts are just disgusting,” one user wrote.