After a storm, about a million jellyfish were thrown to the shores of the Tuzlov Estuary Park in Ukraine 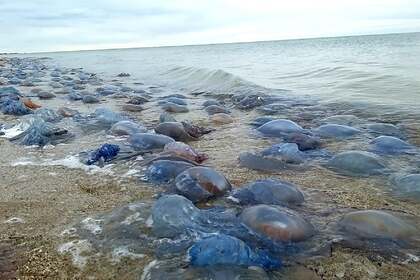 about a million corner jellyfish threw up the coast. This was reported by the press service of the national natural park “Tuzlovsky estuaries” in its Facebook account.

It was noted in the national park of the Odessa region that such storms are quite rare. “The sea has collected and dumped a lot of garbage on the dump, which the employees of the national park will have to remove,” the message says.

In addition, strong waves have changed the coastline of the park – in some places new sections of the beach area have appeared, and in in some parts they disappeared.

Earlier in July, Ukrainian tourists suffered massively due to the invasion of jellyfish in the Sea of ​​Azov. Vacationers received burns despite the fact that they did not touch marine life during bathing. According to experts, this was due to the high concentration of poison in the water.