Head of the GUR Budanov: Russia is preparing to attack Ukraine in late January or early February 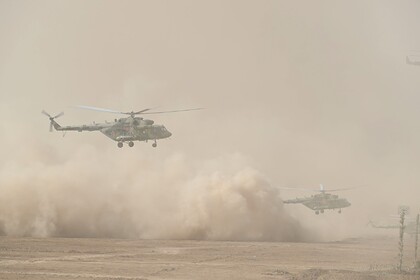 Head of the Main Intelligence Directorate (GUR) of the Ministry of Defense Kirill Budanov predicted an imminent Russian invasion of the country. He noted in an interview with Military Times that the attack would occur in late January or early February.

According to him, Moscow has concentrated more than 92 thousand troops on the border and is preparing for an attack, which will be strikes of artillery, aviation, armored vehicles and airborne assault forces. The head of the GUR indicated that it would become much more destructive than any of those undertaken earlier.

Budanov also pointed out that a series of psychological operations would follow before the invasion. He added that they are already under way to destabilize Ukraine and undermine its defenses.

Kirill Budanov, head of the Main Intelligence Directorate of the Ministry of Defense of UkraineMaterials on the topic00: 01 – April 16 < img src = "/wp-content/uploads/2021/11/c9d9ce09eed419f7ad0bc25fa65b8d21.jpg" />“We have nowhere to retreat” DPR head Denis Pushilin – on the threat of a big war in Donbass and the protection of Russians in Ukraine00: 02 – October 7

“Crisis will come by spring ”Zelensky gets rid of political competitors. Why doesn't that help him hold on to power?

Among the factors of destabilization, the head of the GUR named protests against vaccinations, allegedly organized by Russia, as well as an attempt to foment unrest related to the economy and energy supply. He also noted the border conflict between Poland and Belarus as part of these efforts. Budanov said that the assessments of the intelligence of the United States and Ukraine regarding the timing of the Russian attack are very similar.

On October 30, The Washington Post reported on the increase in the presence of Russian troops near Ukraine. According to the newspaper, “unusual movements of equipment and military” in the west of Russia were recorded after the completion of the large-scale exercises “West-2021”. The Pentagon said that the United States is monitoring the situation on the border between Ukraine and Russia.

Russia denies foreign media reports that the country is pulling troops to the border with Ukraine. In particular, the Foreign Ministry called such statements about Russian aggression ridiculous and dangerous.

Budanov noted that American Javenlin anti-tank systems were first used in Donbass against Russian troops. According to him, along with the Turkish Bayraktar drones, they are intended to become a deterrent psychological factor.

On October 26, the Ukrainian Armed Forces used the Bayraktar TB2 UAV for the first time in Donbass. The self-proclaimed Donetsk People's Republic (DPR) noted that as a result of the use of the drone, no casualties or damage to civilian objects were recorded. In Russia, the situation in the region was called alarming.

Later, the commander of the Joint Forces of the Armed Forces of Ukraine, Sergei Naev, said that the Ukrainian military was ready to continue using drones to strike at enemy positions in Donbass.

Budanov stressed that Ukraine needs US assistance. He considered the current level of American support insufficient.

We need more. The USA should give us everything that we have not received before. And right now. The time is right for that. Because it may be very late afterwards

Kirill Budanov, Head of the Main Intelligence Directorate of the Ministry of Defense of Ukraine

Ukrainian Defense Minister Oleksiy Reznikov, as part of a working visit to Washington, asked the United States to increase arms supplies. He also stressed that Kiev expects Washington to be “stronger” on security issues.

Secretary of the National Security and Defense Council of Ukraine (NSDC) Oleksiy Danilov, at a meeting with a delegation of the US Senate at the Halifax International Security Forum, thanked the United States for the military assistance provided. He said that real support cannot always be measured in money.

Press Secretary of the Russian President Dmitry Peskov on the air of the Russia 1 TV channel called the statements about the invasion whipping up hysteria and provocations. His words are quoted by Interfax.

This hysteria is being whipped up artificially. Those who have driven their armed forces from across the ocean are accused of some unusual military activity on our territory. That is, the United States of America

Earlier, Dmitry Peskov assessed the prospect of a possible militarized solution to the conflict in Donbass. According to him, attempts to resolve the crisis in southeastern Ukraine by force will have the most serious consequences.