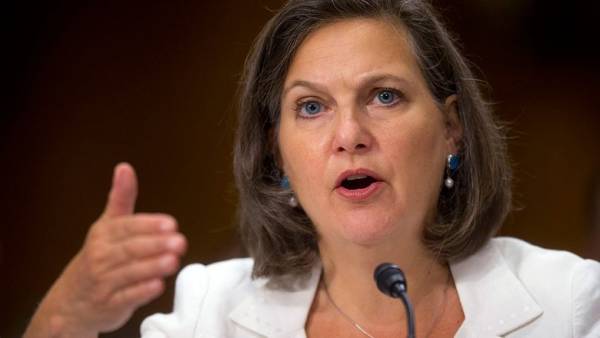 “What & nbsp; we & nbsp; do now is work with & nbsp; germans, with & nbsp; to slow them down & nbsp; consideration of pipeline implementation. The German government has taken significant steps towards & nbsp; this & raquo;, & nbsp; & mdash; said the diplomat.

She added that Berlin had confirmed its readiness to block the project in the event of Russian aggression against Ukraine.

At & nbsp; this, on January 8 & nbsp; Secretary General of the ruling Social Democratic Party of Germany, Kevin Kuehnert said that & nbsp; launch of Nord Stream & nbsp; & mdash; 2 '' is not & nbsp; related to & nbsp; policy. He & nbsp; emphasized that & nbsp; & nbsp; Berlin weighed “ multiple concerns '' and took them & nbsp; into & nbsp; attention.

According to the Secretary General, most Germans are in favor of the early launch of the gas pipeline. Kühnert added that Berlin's “diplomatic toolbox” is much richer than “just shutting down the pipeline.”

Now Nord Stream & nbsp; & mdash; 2 & nbsp; is already fully built and & nbsp; filled with technical gas. The approval procedure by the Federal Grid Agency of Germany was suspended, as the regulator required & nbsp; Nord Sream 2 AG & nbsp; to create a subsidiary in Germany and & nbsp; to submit a new application for & nbsp; certification as an operator.

This process may take several months. Analysts expect the gas pipeline to be launched not & nbsp; earlier than the second half of 2022.

The United States is not the first time to announce the & nbsp; possibility of introducing new anti-Russian measures in the & nbsp; case of a military conflict between Moscow and & nbsp; Kiev. So, Western politicians in & nbsp; in recent months have argued that & nbsp; Russia has concentrated its troops on the & nbsp; border with & nbsp; Ukraine.

As Kremlin spokesman Dmitry Peskov pointed out, the armed forces are moving within & nbsp; within the territory of the state & nbsp; & mdash; it does not & nbsp; threaten anyone and & nbsp; nobody & nbsp; should worry. In & nbsp; Moscow emphasized that & nbsp; statements about & nbsp; “ Russian aggression '' are used as a pretext for & nbsp; building up the NATO contingent in & nbsp; border regions.