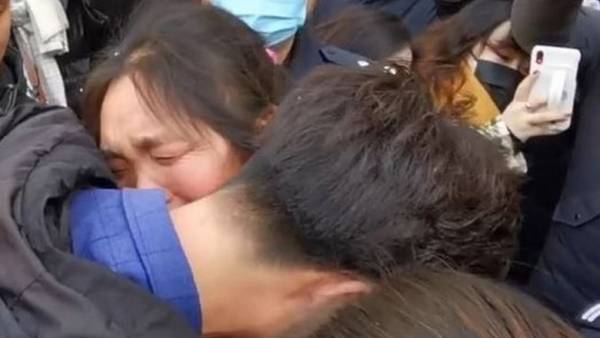 Li Jingwei was only four years old when he was lured out of his home and sold to a gang selling children.

On December 24 last year, he uploaded a hand-drawn map to the Douyin mobile application for short videos (an analogue of TikTok). According to this drawing, the police recognized a small village in Yunnan Province and found a woman there whose son was missing.

A DNA test confirmed their relationship, and on Saturday, January 1, mother and son met.

In the video, Li Jingwei carefully removes his mother’s protective mask and studies her face before bursting into tears and hugging her.

“Thirty-three years of waiting, countless dreary nights, finally, a map drawn by hand from memory, and now this moment of liberation has come—” he wrote in your account before meeting with your family. “Thank you to everyone who helped me reunite with my family.”

Li was abducted in 1989 near the city of Zhaotong in southern China and subsequently sold to a family living in the southeastern province of Guangdong, at a distance of more than 1800 km from his native village.

Growing up, he tried to find out from his adoptive parents information about his origin, checked with DNA databases, but all to no avail. Then Lee asked for help via the Internet. “I am a child who is looking for a home. I was brought to Henan by a bald neighbor around 1989, when I was about four years old,” he said.

“This is a map of my native area that I drew from memory,” Li Jingwei showed an approximate guide to the village. It depicted a school, a bamboo forest and a small pond.

This video was shared by thousands of users.

Child thefts are not uncommon in China. Most often, boys are abducted and sold to other families, because in patriarchal Chinese society, the presence of a son is valued. About 20 thousand children disappear in China every year.

At the same time, thanks to the development of the Internet and the availability of DNA tests, young people are increasingly able to find biological parents. In July last year, a resident of Shandong province Guo Gantan was reunited with his son 24 years after his abduction.