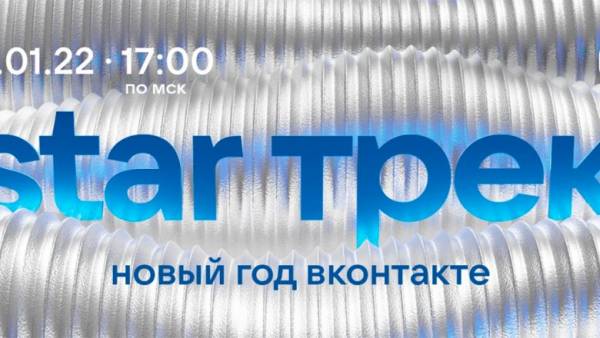 On January 1, at 17:00, the main youth festive concert of the year “STAR Track: New Year VKontakte” will begin in the online community “Official Pages”. But it will be possible to watch it not only online, the show will be broadcast on the main street screens of the capital — on the facades of the cinema “October” and the hotel “Cosmos”, as well as on Taganskaya Square.

The hosts of the show will be Vladimir Marconi and Alla Mikheeva, and those artists who are often listened to on VKontakte will take part in the concert. For example, the duo HammAli & Navai, whose “Bird” became the track of the year in VK Music, as well as the Big Baby Tape release BANDANA I, which he recorded with Kizaru and got into the top 10 albums. Also, their hits will be performed by “Hands up!”, “Leningrad”, Sergey Shnurov with his new project “Zoya”, as well as ESMI and Constantine.

Bloggers Karina Cross, Zhenya Ershov and Vanya Dmitrienko will take part in the festive concert. In VK Calls, they will communicate with their fans and play games with them.

The highlight of the festive concert “STAR Trek: New Year VKontakte” will be a special greeting from space from Russian cosmonauts from the ISS.