164 years ago, the first postage stamps appeared in Russia

On December 22, 1857, the Postal Department issued a circular “On the introduction of postage stamps for general use.” The trial copies of the stamps were approved by Tsar Alexander II and “deigned to call them postage stamps instead of stamp ones.” The stamp depicted the state emblem of Russia – in a blue oval on the background of a mantle crowned with a crown (the author of the drawing is the senior engraver of the Expedition of State Paper Procurement F. M. Kepler).

Annually on December 22 in In Russia, employees of the energy industry celebrate their professional holiday – the Day of the Power Engineer.

For the first time, a professional holiday, the Day of the Power Engineer, was established in memory of the day of the adoption of the State electrification plan of Russia. The GOELRO Plan, the first unified state long-term plan for the development of the national economy of Russia, was developed in 1920 in Soviet Russia by the State Commission for Electrification of Russia.

The GOELRO plan became the starting point in the creation of the electric power system, as well as the first scientifically based long-term economic development program in the country. It was designed for 10-15 years and provided for a radical reconstruction of the national economy on the basis of electrification (construction of large enterprises, construction of 30 district power plants, including ten hydroelectric power plants (HPPs), with a total capacity of 1.75 million kilowatts and an annual output of 8.8 billion kilowatts. The plan was completed by 1931. December 22, 2021 marks the 84th anniversary of the birth of Eduard Nikolaevich Uspensky. The writer was born on December 22, 1937 in Yegoryevsk (Moscow region). My father worked in the apparatus of the Central Committee of the CPSU (b), my mother was a mechanical engineer.

During his student years, Ouspensky engaged in literary creativity, began publishing in 1960. He became widely known as the author of children’s books “Crocodile Gena and his friends”, “Down the Magic River”. In 1980-1990 he published a series of children’s books “Holidays in Prostokvashino”, “Uncle Fedor, the dog and the cat”, “Kolobok is on the trail”, etc. Uspensky acted as the author of cartoon scripts, many of which are loved by more than one generation of viewers. On August 14, 2018, it became known about the death of Eduard Uspensky.

On December 22, 1989, a popular revolution took place in Romania, which led to the overthrow of the government of the President of the Socialist Republic of Romania, General Secretary of the Communist Party of Romania Nicolae Ceausescu. Romania became the only country in Eastern Europe where the socialist regime was overthrown not as a result of the “velvet revolution”, but by an armed uprising, and the former leader of the country was executed. 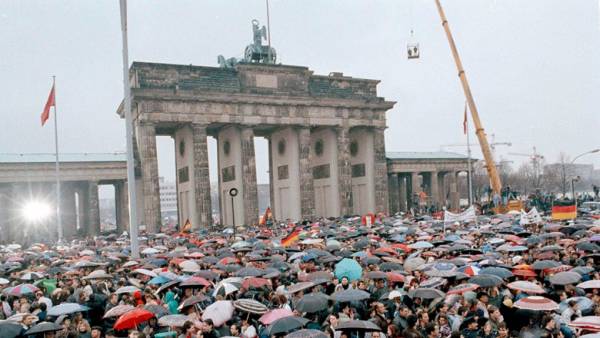 Opening of the Brandenburg Gate

Through The Brandenburg Gate was the boundary between East and West Berlin. The passage here has been blocked by a wall since August 1961. On December 22, 1989, the Brandenburg Gate opened for passage. The GDR itself ceased to exist on October 3, becoming part of the FRG together with West Berlin as a result of bilateral negotiations and the conclusion of an Agreement on the Unification of Germany.

According to RIA Novosti, TASS, Kommersant and open sources