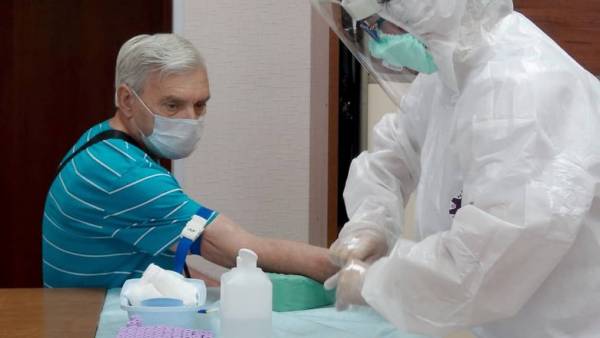 The level of antibodies to COVID-19 decreases fastest in young men, and it lasts better and longer in older people, while severe course, increased body weight and a high percentage of lung damage positively affect the immunity produced. This was found out during the study by experts of the Kirov Military Medical Academy and the Helix Laboratory Service. Scientists are inclined to believe that testosterone can suppress the production of antibodies. This is the second Russian study that confirms that immunity after the coronavirus lasts an average of six months, and after that most of the citizens need vaccination.

Experts of the Helix Laboratory Service and the Kirov Military Medical Academy from June 1, 2020 to August 1, 2021, within the framework of the Response research project, observed changes in the level of specific antibodies (IgG) in people who had suffered COVID-19 of varying severity, including in asymptomatic form. In total, 1,421 people took part in the study — men and women aged 18 to 70 years, of which 1,205 were outpatient patients and 216 were patients undergoing inpatient treatment at four clinics of the Academy with moderate and severe coronavirus infection.

The study participants were divided into three age groups, according to the WHO classification: young people (from 18 to 44 years old), middle-aged people (45-59 years old) and the elderly (60-70 years old).

At the same time, all of them have not previously been sick with coronavirus, have not been vaccinated, do not have immunodeficiency, autoimmune and oncological diseases. Patients at each of the study points — on the 1st, 14th, 45th, 60th, 90th, 180th days from the onset of the disease – were quantified with specific IgG class antibodies to the spike (S) protein of the SARS-CoV-2 virus. Representatives of the laboratory note that the assessment of the concentration of specific antibodies was carried out on the basis of the results obtained using the DiaSorin test system (Italy) on the equipment of the same manufacturer. The sensitivity of the test system, they claim, is more than 97%, and the specificity is more than 98%.

Experts concluded that in mild forms of the disease, the dynamics of antibody production depends on gender and age.

So, in women, there is an increase in the concentration of antibodies by the 180th day from the onset of the disease, and in men, especially in young people, on the contrary, starting from the 90th day there is a tendency to decrease the level of immunoglobulins.

In people who have had COVID-19 in moderate to severe form, gender does not affect the production of antibodies, but older patients have a higher level of immunoglobulins compared to young ones.

In particular, in the group of outpatient patients by the end of the study, men under 44 had about 40-50 relative units of class G antibodies (according to the classification of DiaSorin), in the older age group — about 70 relative units; in young women — about 60-70, in older women – almost 120 units. In the group of hospitalized patients, the values began with 120 relative units, reaching 170 at the peak of determining the concentration of immunoglobulin G in the corridor of 60-90 days, and subsequently descended to 70-120 relative units.

The authors of the study claim that the severity of COVID-19 and the volume of lung tissue damage directly affect the level of class G immunoglobulins.

In accordance with this, the factors determining the more severe course of the disease — obesity, the increase in C-reactive protein, the number of days of fever and oxygen therapy – also lead to a higher production of antibodies by the body. In addition, the study found that the use of hormonal anti-inflammatory therapy (glucocorticoids) in the treatment of moderate and severe forms of COVID-19 also contributes to an increase in the level of antibodies in patients — the higher the dose of glucocorticoids, the higher the IgG level.

Explaining this feature of antibody formation, Dmitry Denisov, medical director of the Helix laboratory service, notes that the older age group “differed in higher concentrations of antibodies” and “reacts more strongly to coronavirus infection than younger people”, since their immune system was more often challenged during their lifetime.

Head of the First Department and Clinic (therapy of advanced training of doctors) named after Academician N. S. Molchanova, chief researcher of the project Vladimir Salukhov adds: more and more data, including experimental ones, show that testosterone can suppress the production of antibodies. “Clinical studies have described lower IgG production during influenza vaccination in men, especially in men with high testosterone levels during immunization. Therefore, it was young men who were characterized by the lowest production of immunoglobulins,” explains Salukhov.

The authors of the study concluded that young men who have had COVID-19 in mild or asymptomatic form should consider vaccination six months after infection. In patients who have had moderate to severe coronavirus pneumonia and received glucocorticoids in the treatment regimen, on the contrary, the chances of getting infected again are less: after six months they can only limit themselves to IgG control testing.

According to Yevgeny Kryukov, the head of the Kirov Military Medical Academy, the conclusions of experts only confirm the importance of vaccination for those who have been ill. “At the beginning of the epidemic, when the Wuhan strain was circulating, the incubation period was up to 14 days. If the strain had not changed, it would have allowed the immune system to recall contact with the coronavirus and engage in the development of a high titer of antibodies. But the “delta” option came, the incubation period decreased to 3-5 days. Now there is a new strain of omicron, in which the period from the moment of contact to the moment of the disease is even shorter, and the immune system no longer has the opportunity to develop an antibody titer so as not to get sick,” says Kryukov.

In Russia, only one similar scientific work is known — a serological study of the spread of coronavirus in St. Petersburg, conducted by a group of scientists led by Anton Barchuk, Director of the Institute of Interdisciplinary Studies at the European University. 2.4 thousand residents of the city took part in it. Most of them remained seropositive (that is, they retained antibodies) at follow-up for no more than 10 months. Anton Barchuk emphasizes that both studies converge in terms of timing, but the other hypotheses presented in the report of the Helix Laboratory and the Military Medical Academy, in his opinion, “must be confirmed by something else.”