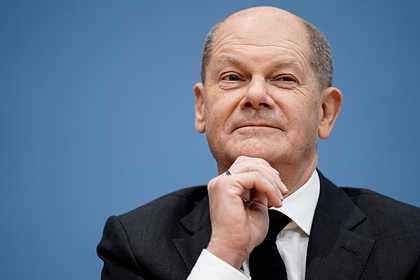 Chancellor of Germany. The broadcast from the meeting at which the voting took place was published on the Bundestag's Twitter.

According to the laws of the Federal Republic of Germany, the chancellor is elected by secret ballot without debate, already in the first round. The assembled politicians congratulated him on his election. Scholz received the majority of votes in his favor among the deputies of the lower house of parliament (736 in total).

395 votes Scholz received in the Bundestag

Now the future chancellor will go to a meeting with President Frank-Walter Steinmeier, after which he will take the oath of office in parliament .

Thus, lawmakers ended the 16-year period of rule of ex-Chancellor Angela Merkel. The current head of the German government will step down immediately after the election of Scholz, during this day.

“There will be no other chancellor, no shadow chancellor. Madame Chancellor, as she has already stated, then intends to quit political work, “- said the official representative of the German government Steffen Seibert.

According to a number of analysts, after her departure from office, Merkel left “a few positive moments” both for her fellow party members from the Christian Democratic Union (CDU) and for her European colleagues in general.

Farewell ceremony Army with Merkel took place on December 2. 200 people were invited to the ceremony – all 52 federal ministers during her reign and other associates.

Deputy Chairman of the Federation Council Committee on International Affairs Vladimir Dzhabarov in a conversation with Lenta.ru positively appreciated the election of a new chancellor.

We have always had fond memories of the Social Democrats, because when this party was in power in the FRG, relations with the Soviet Union were improving, a policy of “ detente '' was pursued

In addition, Dzhabarov hoped that the new chancellor would treat Russia constructively and build his policy “not on confrontation, but on solving certain problems,” despite the Russophobic positions of some coalition members.

The Social Democrats managed to create a coalition in the government

SPD managed to finally sign an agreement on the creation of a coalition with the parties “Union90/Greens” and the Free Democratic Party (FDP) on November 24.

In the coalition agreement reached, the German government promises to return to the debt brake in 2023, not to introduce any new taxes, to abandon coal in 2030, to modernize the industry and solve social issues related to the lack of housing and child poverty.

Deficit of Democracy. Power is changing in Germany. Who will lead the country into the future and what will it be like? 00: 02 – November 21, 2018

It won't be betterWhat will Germany be without Merkel

The SPD won the parliamentary elections on September 26 with 25.7 percent of the vote, while the conservative CDU/Christian Social Union (CSU) bloc gained just 24.1 percent. In total, six parties entered the new Bundestag, with 736 deputies.

Analysts do not predict a deterioration in relations between Russia and Germany relation to Russia, therefore, no significant deterioration is expected. In an interview with Lenta.ru, he admitted that the main place in German foreign policy will in any case be given to relations with the United States.

Speaking about Russian-German relations, the political scientist recalled that the Bild newspaper named the approach of the future Chancellor to relations with Moscow “the principle of village disco”, that is, “dance with those in the hall.” Kamkin jokingly noted that the German edition most likely meant its own local disco, because at village dances in Russia, it can go as far as wall-to-wall fights. “The main thing is to avoid it,” he said.