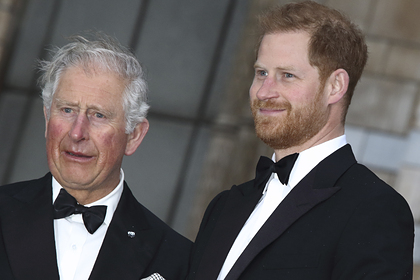 in the USA, have improved a little. This is reported by the New York Post.

An anonymous source close to the royal family told the publication that Charles and Harry began to communicate on the phone again. “But I don’t think they are doing great,” he admitted. “This is not to say that they call up every week for intimate conversations.”

At the same time, experts on the royal family, interviewed by the Daily Mail, believe that relations between Harry and Charles continue to deteriorate. They associate this with the British Empire trade scandal, in which Charles was involved.

Charles' adviser Michael Fawcett is suspected of promising Saudi businessman Mahfuz Marey Mubarak bin Mahfuz to help him obtain a British passport in exchange for donations. After donating £ 1.5 million to the Prince's funds, the entrepreneur was awarded the Order of the British Empire.

Prince Harry also met with Mahfouz Marey Mubarak bin Mahfouz, after which he donated tens of thousands of pounds to his funds. When information about this got to the media, Harry said that he doubted the entrepreneur's motives and broke off relations with him a year before his award.

Royal biographer Angela Levin sees this statement as an attempt to blame Charles. “Harry attacks his loving father endlessly to feel stronger,” she suggested. According to expert Richard Fitzwilliams, Harry's announcement of the Order scandal is fueling rumors of a tepid relationship between him and Charles.

Levin and Williams are mentioned in the Bot Sentinel investigation as one of the most active repeaters of slander and conspiracy theories about Prince Harry and his wife Meghan Markle, published on the Internet. In particular, with the filing of Levin, a conspiracy theory got into the media that Harry and Megan paid $ 1.5 million to post their photo on the cover of Time magazine. Fitzwilliams circulated an anonymous tweet in which one-year-old son Harry and Meghan were compared to Schlitzi, a circus dwarf with a very small brain who appeared in the 1932 film Freaks.

Prince Charles is the eldest son of Elizabeth II, who will be transferred to British throne after her death. In addition to him, the queen has three more children: Princess Anne, Prince Edward and Prince Andrew, who stepped down in 2019 due to charges of raping underage girls. The second in line to the British throne is taken by Charles' eldest son, Prince William. His youngest son Prince Harry moved to the United States in 2020.