Bloomberg: US will press Germany to stop Nord Stream 2 over Ukraine 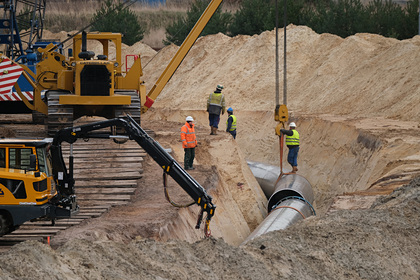 US will press Germany to stop ” Nord Stream-2 ”in case the fears of the American side are confirmed and Russia decides to attack Ukraine, Bloomberg found out.

The gas pipeline stop is one of the levers of influence on Moscow, which Washington is discussing with its European allies. According to the new version of the US sanctions plan in the event of a “Russian invasion of Ukraine”, Washington intends to completely block the project, the agency notes, citing sources familiar with the White House's plans. Other possible options for action are sanctions against Russian banks and the export of Russian goods.

Bloomberg recalled an agreement under which the government of former German Chancellor Angela Merkel pledged to take action if Russia begins to use aggression against Ukraine or use “ Nord Stream 2 “as a weapon.

In September, the head of Gazprom, Alexei Miller, announced that the construction of Nord Stream 2 had been fully completed. By mid-October, it was already ready for launch, but the date of its real start of work will be determined by the European regulator. The Nord Stream 2 certification process could take several months. As the representative of the Ministry of Economy of the Federal Republic of Germany Nina-Marie Güttler said, the gas pipeline will not be launched in any case until its certification is completed.