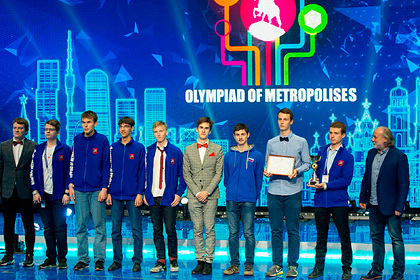 – participants must complete tasks without leaving their countries. Teams from more than 30 cities of the world, including the capital of Russia, are fighting for the victory. The results of the competition will be announced on December 13, 2021. This was announced by the Deputy Mayor of Moscow for Social Development Anastasia Rakova.

“The Olympiad of megacities has been held since 2016 at the initiative of the mayor of Moscow. Every year, medalists of the highest level competitions take part in the Olympiad. Over the past few years, the Olympiad has become a truly prestigious event, reflecting the international recognition of the level of Moscow education. The leading megacities of the world are taking part in the competition, among which Moscow occupies one of the leading places. Eight members of the Moscow team were selected based on their achievements at the All-Russian and International Olympiads. Moscow schoolchildren have unique opportunities to show their talent and reach the Olympiads of the highest level. In this they are helped, among other things, by training in pre-professional classes, for example, in engineering or IT classes. There, the children study in depth specialized subjects, including physics, chemistry, mathematics, computer science, in which schoolchildren will compete in the Olympiad, “the vice-mayor said.

Schoolchildren aged 14-18 from the largest cities and capitals of the world will compete in knowledge in four subjects: mathematics, computer science, chemistry and physics. Each city represents a team of up to eight people at the Olympiad – two participants per discipline.

The competition was traditionally opened by an interdisciplinary blitz-tour. In two hours, the teams completed tasks simultaneously for four subjects – mathematics, computer science, chemistry and physics. In total, it was necessary to solve 80 problems, 20 for each subject. In terms of difficulty, the tasks of the round correspond to the school final exams of the countries participating in the Olympiad. The blitz-tour is an intellectual warm-up before the main rounds; its results are not taken into account when summing up the results of the Olympiad.

In 2021, schools from all over Russia took part in the blitz-tour. The guys performed the same tasks as the participants of the Olympiad. Moscow schools have been given a separate credit. Winners and prize-winners will be awarded with electronic diplomas.

The main rounds of the competition will take place on December 7-9, 2021. In physics and chemistry, the participants of the Olympiad will have theoretical and practical rounds. In mathematics and computer science, schoolchildren will solve problems.

The ceremonial closing of the Olympiad of megacities will take place on December 13, 2021 in an online format. The names of the winners and awardees will be announced at the ceremony. Detailed information about the competition is available on the website of the Olympiad.

The Olympiad of megacities has been held since 2016 at the initiative of Moscow Mayor Sergei Sobyanin. Last year, the competition was also held in a distributed format. The best teams in the team competition were teams from Moscow, Hanoi, Bucharest, Hong Kong and Krakow.