Sana: The Israeli Air Force launched an airstrike on the port area of ​​the Syrian city of Latakia 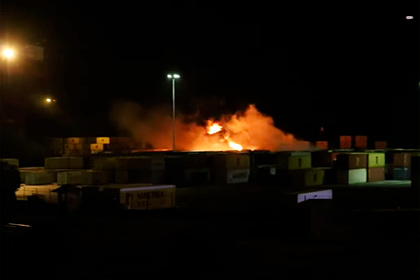 The Israeli Air Force launched an air strike on the port area of ​​the Syrian city of Latakia. This was reported by the Syrian state agency Sana.

Ministry of Friendship. Russia is trying to find new allies … Why is it still difficult to do this without military assistance and loans? 00: 10-16 September

“Maneuvers behind Moscow's back” The US leaves the Middle East. Why it will not help Russia to strengthen its position in Syria

According to the agency's military sources, Israel launched a missile attack on a container site in the port. The blow was delivered from the Mediterranean Sea by several missiles. According to the local administration, there were no casualties in the incident.

“The fire brigades managed to extinguish the fire that broke out at the port's container site as a result of the Israeli aggression, and they are currently working on cooling the facility,” the governor told the agency Latakia (region of the same name) Amer Ismail Hilal.

The Times of Israel stressed that Israeli aircraft rarely attack port areas. The publication also stated that the Israeli army did not comment on this news in any way. According to the Times of Israel, Latakia is a vital port through which most of the imports are delivered to Syria.

On November 24, the Syrian army reported that Israeli aircraft had attacked the province of Homs. Ground-based air defense systems were able to repel most of the missiles, but some of them reached their targets. According to Damascus, two civilians were killed as a result of the Israeli Air Force strikes.