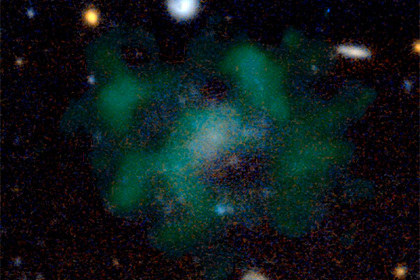 114905 contains no traces of the existence of dark matter. Observations of the galaxy were carried out for 40 hours using a number of modern telescopes. The results have been accepted for publication in the Monthly Notices of the Royal Astronomical Society. They are described in detail in the preprint available in the arXiv repository.

Galaxy AGC 114905 is located at a distance of 250 million light years and is classified as an ultradiffuse dwarf galaxy due to its low luminosity. Although it is about the size of the Milky Way, it contains a thousand times fewer stars. The prevailing opinion among scientists is that ultradiffuse galaxies can exist only if they contain dark matter that provides sufficient mass for gravitational confinement of matter and triggering star formation.

The researchers carried out observations of the galaxy between July and October 2020 to collect data on the gas rotation rate depending on the distance to the center of AGC 114905. The results showed that the movement of gas in the galaxy is completely explained by the influence of ordinary matter, that is, there is no dark matter. This creates a problem for modern concepts of the evolution of ultradiffuse galaxies.

There can be several explanations for this. First, dark matter could have been ripped off by the gravitational forces of nearby massive galaxies. However, in the case of AGC 114905, there are no such galaxies nearby. Second, the result may be influenced by the angle at which astronomers observed the galaxy. The authors note that this angle in reality can deviate greatly from the value that they used in the calculations. However, the associated error is still not large enough to reconcile the behavior of AGC 114905 with the model of cold dark matter or modified Newtonian mechanics.

At the moment, scientists are observing the second ultradiffuse dwarf galaxy. If, in her case, astronomers again do not find traces of dark matter, this will become convincing evidence in favor of the existence of galaxies devoid of dark matter.

The model of cold dark matter explains the problem of hidden mass in galaxies, which is that the visible matter cannot explain the high rotational speeds of stars far enough from the core. According to Newtonian mechanics, this speed should be lower than the observed one. An alternative theory called modified Newtonian mechanics (MOND) rejects the dark matter model and introduces changes to Newton's laws.