The girl showed a video with her father in a nightclub, after which he became famous on the network 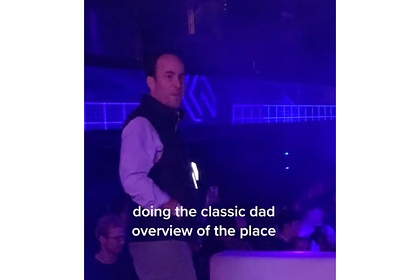 TikTok user @taliasc shared a story about , as he visited a nightclub with his father, which made him an Internet star. The video, published on TikTok in mid-November, drew the attention of The Mirror.

The girl told how she spent time in the club, where she came with her father, after which he became famous on the network. “First, as all dads do, he examined the surroundings,” the author of the video shared. Later, she said, he took a couple of shared shots for a family group chat. “Here he drinks Diet Coke, while everyone else is shots of tequila,” she demonstrated.

Later, the man spent time on the dance floor and sang popular songs with everyone. “And here he shakes to the beat, sending working emails,” – showed the girl's father. “Finally, she dances at the exit to remind everyone who is in charge here,” she concluded.

The video received about 10 million views. “He is the main one, we just exist on this earth,” one of the users commented on the video. Most of the commentators were amused by the fact that the man in the club was sending work messages, having time to dance.

Later, the heroine of the story wrote under the publication that her father was very happy that the video received such a response. The fact is that usually only those videos where the girl filmed her mother became popular.

Earlier, another TikTok user told how she did a DNA test and revealed the secret her father kept. The girl discovered that she has 50 brothers and sisters, and found out that her father was a sperm donor.