Dynamo defeated Ufa, which remained from the 36th minute, with nine men with a score of 2: 0 in the RPL match 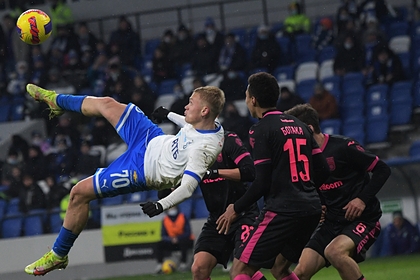 Dynamo Moscow defeated Ufa in the 17th round match of the Russian Premier League (RPL) approached Zenit in the standings. This was reported by the Lenta.ru correspondent.

The meeting was held in Moscow and ended with a score of 2: 0. In the sixth minute, the guests' striker Vyacheslav Krotov was sent off. In the 36th minute, Ufa remained nine men after midfielder Egash Kasintura received a red card. Goals for Dynamo were scored by midfielders Denis Makarov (29th minute) and Arsen Zakharyan (86th).

After 17 matches, Dynamo have 35 points and are in second place in the tournament table RPL. The team is two points behind the leading Zenit. Ufa is in the penultimate 15th place with 16 points.

In the next round, Muscovites will play Zenit at home, and Ufa will play away with Lokomotiv Moscow. Both meetings will take place on December 12th.