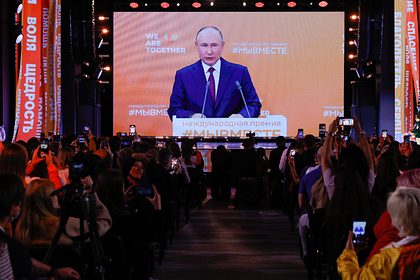 Russian President Vladimir Putin announced that will take part in the “Wish tree” charity event. He announced this during the ceremony of awarding the winners of the international prize “We are Together”, reports TASS.

With the help of the leading Russian leader via video link, he “took” three postcards from the tree with the wishes of the children, which he will have to fulfill. The first postcard belongs to 14-year-old Mark from the Moscow region, he dreams of a guitar. The second note was written by a five-year-old Hazor from Buryatia, the boy wants to try himself as a firefighter. The third wish that Putin will fulfill is the dream of 13-year-old Tatiana from the Stavropol Territory; the young Russian woman wants to attend the Swan Lake ballet at the Mariinsky Theater. “Consider that you are already on the road,” Putin said after hearing about the girl’s desire.

On Sunday, December 5, Putin announced the name of the winner of the “Volunteer of the Year” nomination – it was Pavel Berezhansky, a pediatrician. previously awarded the Luka Krymsky medal for his great contribution to the development of the volunteer movement in the healthcare sector.

Putin also noted the enormous burden that volunteers took on during the pandemic, and congratulated everyone involved in the “We are Together” campaign on the holiday .