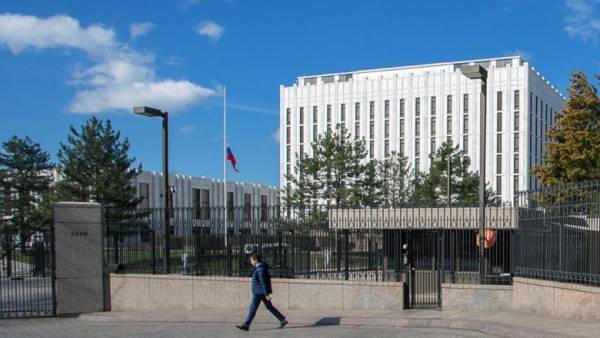 The United States follows the logic of Russia, adhering to the principles of reciprocity in & nbsp; diplomatic relations, so there was a requirement for & nbsp; Russian diplomats to leave the territory of the United States after three years of work. American Ambassador to & nbsp; Russia John Sullivan said about this in an & nbsp; interview with RBC.

When Russian visas for American diplomats expired, they & nbsp; had to leave, he added. A year ago, the ambassador notified the Russian diplomatic department that & nbsp; this order would be changed: “ The Russian government has always said that & nbsp; wants parity and & nbsp; reciprocity in & nbsp; our diplomatic relations, that & nbsp; we answered & nbsp; & mdash; to & nbsp; diplomats of both countries should be treated equally & nbsp; & mdash; a three-year visa and & nbsp; expiration of privileges and & nbsp; immunity, as soon as the visa expires, this is how they treat us and & nbsp; this is how we & nbsp; will also & nbsp ;.

Russian Deputy Foreign Minister Sergei Ryabkov, commenting on the planned departure of Russian diplomatic workers , promised that & nbsp; Moscow would respond in a mirror-like manner: “ The corresponding number of American personnel will leave & nbsp; our country. By & nbsp; that & nbsp; same & nbsp; the very principle: those who & nbsp; & ldquo; sit out & rdquo; three-year term. '' Ryabkov also said that & nbsp; Moscow offers the United States to waive & nbsp; this requirement.

In recent months, Deputy Minister Ryabkov also reported on & nbsp; a Russian proposal to & nbsp; Washington to “ nullify '' the situation with & nbsp; diplomats and & nbsp; start work with & nbsp; blank slate. Commenting on this proposal in an & nbsp; interview with RBC, Ambassador Sullivan said that & nbsp; & quot; it is not & nbsp; easy to say that & nbsp; we & nbsp; will remove all restrictions. & Quot ;.