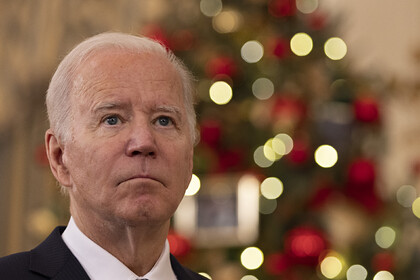 US President Joe Biden refused to respect anyone's ” red lines “on the situation with Ukraine. This statement was made by the American head of state ahead of a conversation with Russian leader Vladimir Putin, TASS reports.

Thus, Biden commented on statements that Moscow considers the deployment of weapons in Ukraine, in particular, hypersonic weapons, to be “red lines”. and bringing NATO infrastructure closer to Russian borders. “I do not recognize anyone's red line,” the US President emphasized.

The American leader said that Washington is developing comprehensive initiatives to make it difficult for Russia to invade Ukraine, as there are fears that a full-scale conflict, writes Reuters.

On December 1, Russian President Vladimir Putin called on the North Atlantic Alliance to provide guarantees of non-expansion to the borders of Russia. Speaking at a collegium of the Ministry of Foreign Affairs on November 18, he said that Russia is a peace-loving state that wants to create an “atmosphere of good-neighborliness and partnership in the post-Soviet space.” However, the president expressed confidence that NATO, on the contrary, is inclined towards an active confrontation with Moscow.

Russian Foreign Ministry spokeswoman Maria Zakharova noted that Ukraine's accession to NATO would become a “red line” for Moscow. She stressed that the desire to turn the country into a springboard for confrontation with Russia is fraught with serious negative consequences, such actions of the alliance destabilize the military-political situation in Europe.