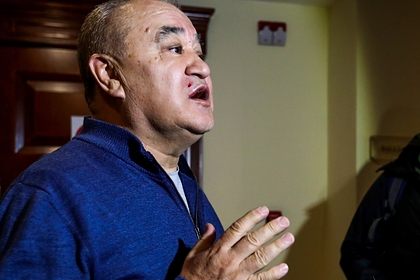 Ata Meken “(” Fatherland “) Omurbek Tekebayev was attacked by political opponents and his phone was taken away. This was reported by Radio Azattyk (included by the Russian Ministry of Justice in the register of foreign media performing the functions of a foreign agent) .

It is noted that the attack on Tekebayev took place in the Park Hotel restaurant “. According to the politician, about 70 unknown strong-build men in medical masks arrived at the institution and began to complain to him for organizing a rally after the parliamentary elections in the country.

And the thunder burst out Kirghiz again smash the house of the government and the prison. Why do elections in the country end in revolutions? 00: 03 – October 21, 2020

A quick revolution The Kyrgyz changed power in ten days. Why is it so easy to carry out a coup in the republic?

“They asked:“ Why are you disturbing the peace? Why are you holding rallies near the CEC? ” Before I could answer, they hit me. They told me to go outside, where they would put me in a minibus and take me to an unknown place, where they would arrange a showdown. The leader repeated: “The elections are over, admit you lost, we won, you must give way to the youth,” Tekebaev said.

He added that after people began to gather at the scene of the incident, the attackers fled, taking his phone with them. The politician also noted that the police were nearby, but did not intervene in what was happening. Tekebaev linked the incident with his political activities and called it political terror.

Lawyer Kanat Khasanov on his Facebook page said that later the Ata Meken leader's phone was tracked using a program that indicated that the smartphone was nearby with the building of the State Committee for National Security (GKNB) of Kyrgyzstan.

The department reacted to this statement and stressed that what was happening had nothing to do with the GKNB or its employees, and the information about the location of the politician's phone was “an attempt provocations against the security agencies. ”

On November 28, elections to the republic’s parliament were held in Kyrgyzstan. They were led by the pro-government parties Ata-Zhurt (Fatherland) and Ishenim (Trust), which received 13 and 12 percent of the votes, respectively. Representatives of the Ata Meken, Reform, Social Democrats, Azattyk (Freedom) and Uluttar Birimdigi (People's Harmony) parties reported violations during the election campaign and fraudulent voting results.