In Perm, they found the houses of wealthy citizens of the 18th and 19th centuries, they contained wine stocks 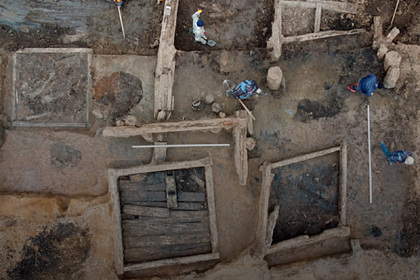 wooden and brick houses belonging to wealthy residents in the 18th and 19th centuries. Lyudmila Romanova, an engineer of the Department of History and Archeology of Perm State National Research University, told about this, reports “In course.ru”.

According to her, only the cellars of the buildings have survived, since at the beginning of the 20th century the street was often rebuilt. In addition, during the Civil War, most of the buildings were destroyed or blown up, after which they were not restored. Later, they simply began to build new houses on the leveled surface.

Thanks to the dense and damp earth, in which there was no oxygen, archaeologists were able to extract from the pits in good condition such items as sandals, buckets, and clothes leather. In addition, dishes and jewelry were found there. It is clarified that usually such artifacts are rarely found in Perm in a similar state. Romanova said that according to the finds, specialists will recreate the appearance of the Perm inhabitants of that time.

Nearby, at the corner of Sovetskaya and Gorky, an old filled ravine was also explored. In it, archaeologists also unearthed the remains of wooden houses. It is assumed that the townspeople used to use them as outbuildings.

Initially, it was believed that this area of ​​the city was not inhabited by people. Previously, there was no archival information about the middle and second half of the 18th century, when the Perm settlement was just forming – the known data refer only to the middle of the 19th century. At the same time, new artifacts prove the opposite, the archaeologist noted. In addition, the nature and variety of buildings show that “the inhabitants of these houses were definitely not poor peasants.” Wine reserves were also found in the cellars of the houses.