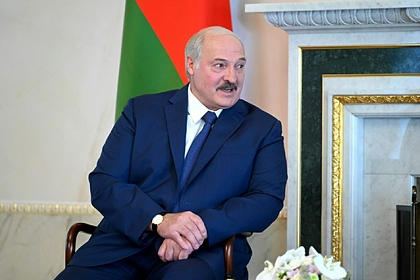 -fact and de jure. He stated this in an interview with RIA Novosti.

We all understood that Crimea is de facto the Russian Crimea. After the referendum and de jure, Crimea became Russian

The head of the Belarusian state also spoke about his visit to the peninsula. According to him, a trip there together with Russian President Vladimir Putin will mean the recognition of Crimea as Russian territory.

My visit to Crimea, to which I have every right, under whose protectorate he is there, the leadership and whoever is Crimea. This is my Crimea. We have a certain agreement with Putin that we will stay in Crimea

Lukashenka plans to start his visit from Sevastopol. The governor of the city, Mikhail Razvozzhaev, said that the Belarusian leader is always expected, they will be happy to show him memorable historical places, talk about the implementation of new large-scale projects, and promised to go to sea from Balaklava or from the Grafskaya pier. He added that it is good in Sevastopol at any time of the year.

Lukashenko said that Belarus has a free hand on flights to Crimea, the Belavia company will start operating flights when necessary.

The head of state recalled that a Belarusian sanatorium is located on the peninsula, and the republic will be able to deliver its citizens there.

We will fly when we need it. Unfortunately, not through Ukraine. Twice, probably, a circle or one and a half will be further

Since May 26, Ukraine has suspended flights with Belarusair due to the Ryan incident with an emergency plane landing in Minsk Belarusian security forces of the founder of the opposition Telegram-channel NEXTA Roman Protasevich.

The head of Crimea Sergey Aksenov wrote in his Telegram channel that the Crimeans will be glad to see the President of Belarus on their land, the decision to visit the peninsula corresponds to the spirit of fraternal relations between the two peoples.

Aksenov stressed that the visit will open up “colossal opportunities.” in terms of the development of relations between Belarus and Crimea.

Senator from Crimea Olga Kovitidi, in an interview with RT, said that Lukashenko's statement about visiting Crimea testifies to the observance of the most important democratic principle – the right to self-determination, while some Western leaders demonstrate their commitment to democracy only in words.

Desire President of Belarus was announced in a difficult period when humanity is so in need of harmony, peace and stability … In this difficult time, Lukashenka's statement is timely and courageous as a man

State Duma deputy from the Republic of Crimea Alexei Chernyak, in an interview with Radio 1, assessed the possibility of opening flights between the republic and the peninsula. He noted that the Crimeans and Belarusians have been waiting for direct flights for the last seven years, and called this a step towards rapprochement between Belarus and Russia. According to him, travel to Crimea will become more convenient, and commodity exchange will become easier and more accessible.

We have a Belarusian community and people who live here and have relatives from Belarus, but they have to go around the whole Ukraine in a circle. In addition, it will reduce the cost of goods and products, because our Crimean wines have been supplied to Belarus for a long time. A lot of our enterprises cooperate with Belarus

Alexey Chernyak State Duma deputyMaterials on the topic00: 01 – 25 August Crimean gatherings. Politicians from all over Europe gathered on the 30th anniversary of Ukraine's independence. Will this help bring Crimea back? 00:01 – October 25

“Youth is aimed at Europe” Belarusians, following the Ukrainians, are striving for the EU. How can Russia hold them back? According to him, better late than never.

The senator pointed out that the recognition of the peninsula as Russian would benefit Belarus. He noted that the situation will benefit other countries so that they stop thinking by double standards.

Crimea became part of Russia in March 2014 after a referendum in which the overwhelming majority of the region's residents who voted supported such a decision. At the same time, Belarus did not recognize Crimea as Russian. Earlier, Lukashenko said that he was ready to change his position on the peninsula only if the Russian oligarchs recognize Crimea as part of Russia.

Russia negatively assessed the words of the Belarusian president. So, in the Federation Council his statement was considered inappropriate, and in Crimea it was noted that the Belarusian leader would not be able to sit on two chairs.