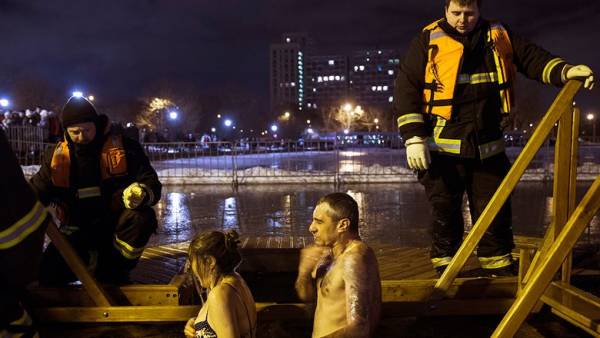 “When people ask me now whether it is necessary and worth diving, I urge maximum caution. <...> Any mass gatherings of people are undesirable now. If they can be avoided, it is better to avoid them,” Metropolitan Hilarion said on the air of the Church and the World program on the Rossiya-24 TV channel, adding that “the virus has not gone away from us.”

He called on believers to devote their time to “increase their immunity, vaccinate those who have not done it yet,” and also prepare for a new possible wave of exacerbation of the disease, which experts warn about.

Answering the question of whether it is correct to believe that absolution of sins occurs through immersion in the ice hole, the bishop noted that such a statement is incorrect.

“There is no absolution of sins through immersion in the baptismal font. Absolution of sins takes place in the sacrament of confession, when you come to the priest, repent of your sins and confess them wholeheartedly,” the metropolitan said.

The Russian Orthodox Church celebrates the Epiphany on January 19. On the night of Epiphany, many believers, according to tradition, plunge into the ice hole.