Until 2015, the Dutch monarchs traditionally came to the official opening of parliament in a “Golden Carriage” (De Gouden Koets). It is now in the Amsterdam Museum.

However, anti-racism activists drew attention to one of the images adorning the carriage, which, in their opinion, glorifies the colonial past of the country.

The drawing applied to the carriage doors is called “Tribute from the Colonies”. It depicts several Africans and Asians presenting gifts, including cocoa and sugar cane, to a seated white woman, symbolizing the Netherlands. At the same time, one of them is on his knees.

A man is sitting next to a woman, holding out a book to a little boy. As the author of the work, the artist Nicholas van der Waay, said in 1896, this book symbolizes the “gift of civilization” presented by the Netherlands to its colonies. 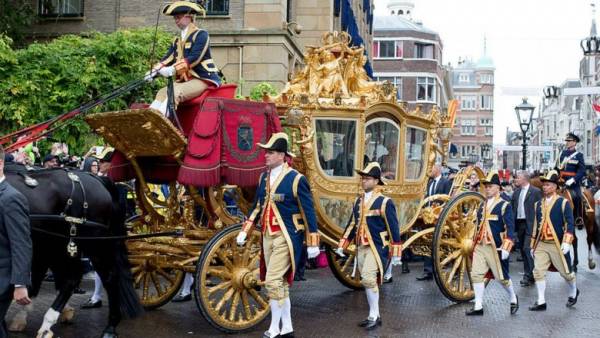 In his video message, King Willem-Alexander of the Netherlands said that this image offends the feelings of many people and urged them to look into the eyes of the country’s colonial past together.

“There is no point in condemning and rejecting our past, looking through the prism of modernity,” the king said. – Banning historical objects and symbols will not solve the problem either. Instead, we need a concerted effort that unites us, not separates us.”

As long as there are people living in the Netherlands who feel the burden of discrimination every day, our dark past will cast a shadow on us.Willem-Alexandrkorol of the Netherlands

Anti-racism activists welcomed this step, but did not agree with the king in everything.

“He says that the past cannot be measured by the standards of the present, but I think this is a misconception, because in the historical context, slavery can be seen as a crime against humanity and a violent system,” said Mitchell Esajas, one of the founders of The Black Archives in Amsterdam.

Over the past few years, disputes about the country’s colonial heritage have not stopped in the Netherlands.

By the beginning of the XVIII century, the Netherlands had captured vast territories of Indonesia, South Africa, Curacao and West Papua. The country was one of the key players in the transatlantic slave trade.

Last year, Amsterdam Mayor Femke Halsema apologized for the city’s role in the slave trade. The Prime Minister of the country refused to make a public apology.