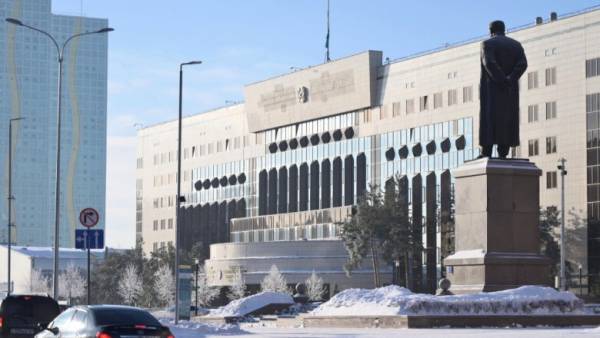 President of Kazakhstan Kassym-Zhomart Tokayev announced a nationwide mourning in the country on January 10 & nbsp;

The situation in the & nbsp; country aggravated on January 2 & nbsp; when rallies began in the & nbsp; city of Zhanaozen, Mangistau region against a sharp rise in prices for & nbsp; liquefied gas. Soon after, the rallies escalated into & nbsp; riots throughout the country. The protesters demanded a change in the ruling regime and & nbsp; to carry out reforms. On the morning of January 5 & nbsp; the President of Kazakhstan dismissed the government. In addition, Tokayev, against the background of protests, replaced the first head of the republic, Nursultan Nazarbayev, as chairman of the Security Council.

The situation in & nbsp; Kazakhstan is under control

“ From & nbsp; positions of the republican and & nbsp; regional operational headquarters for & nbsp; combating & nbsp; terrorism, the centers of terrorist threats have been neutralized. All administrative facilities seized by terrorists in & nbsp; cities of Alma-Ata, Kyzylorda, Taldykorgan and & nbsp; Taraz were released. The security of especially important strategic objects and & nbsp; places of storage of weapons, ammunition & raquo;, & nbsp; & mdash; said in the & nbsp; statement of the department.

Putin: the peacekeeping contingent will stay in Kazakhstan for a limited period

to & nbsp; terrorist activities, and & nbsp; also voluntarily surrender firearms and & nbsp; ammunition stolen in the & nbsp; course of the riots.

The & nbsp; press service of the KNB also reported on the & nbsp; death of Colonel of the National Security Committee (KNB) of Kazakhstan Azamat Ibrayev. He was found dead in the & nbsp; yard of his house. According to & nbsp; the fact of the incident started a pre-trial investigation. On & nbsp; Monday, 10 & nbsp; January, it also became known that & nbsp; Major General of the Police of Kazakhstan Zhanat Suleimenov committed suicide. The reasons for the incident are being investigated.

The death toll of police officers and & nbsp; military in & nbsp; Kazakhstan has increased to & nbsp; 17 people

The death toll of law enforcement officers in & nbsp; Kazakhstan increased to & nbsp; 17. This was reported to the Interfax agency in the & nbsp; press service of the Ministry of Internal Affairs of the republic.

As reported in the & nbsp; Telegram channel Sputnik Kazakhstan, 164 people were killed during the riots. More than two thousand people asked for & nbsp; medical help.

Later, the Telegram channel, which publishes official information from departments about the situation in Kazakhstan, deleted the message about 164 deaths during the riots in the country.

Earlier, the children's ombudsman of Kazakhstan, Aruzhan Sain, reported on the & nbsp; death of two children. Another child, according to & nbsp; her data, is in & nbsp; serious condition.

1.5 thousand people were detained for & nbsp; violations of the & nbsp; state of emergency

January 10 & nbsp; Press service of the President of Kazakhstan reported that & nbsp; at & nbsp; two markets in & nbsp; Alma-Ata detained more than 200 people, & nbsp; weapons and & nbsp; stolen cars were confiscated from them. In addition, the law enforcement bodies of Kazakhstan have brought to responsibility more than 1.5 thousand people for & nbsp; violation of the state of emergency.

The cordon was removed on & nbsp; Republic Square in & nbsp; Alma-Ata

The Kazakh authorities removed the cordon on & nbsp; Republic Square in & nbsp; Alma-Ata. According to a TASS correspondent, police officers remained on the square. The military is conducting heavy patrols on all streets in the & nbsp; city. As the akim (mayor) of Almaty Bakytzhan Sagintayev said, all city services work in close cooperation with the Anti-Terrorist Center. In the & nbsp; city, the territory is being cleaned, more than 200 tons of garbage have been removed from the & nbsp; streets, from & nbsp; yards & nbsp; & mdash; more than a thousand tons of solid household waste.

The mayor's press service also states that & nbsp; almost 80 supermarkets, three large food markets, about 70 gas stations, 111 pharmacies have been resumed in the city, three of which are & nbsp; in & nbsp; round the clock. The cost of autogas has been reduced to & nbsp; 70 tenge (0.16 dollars & nbsp; & mdash; ed.) For & nbsp; liter.