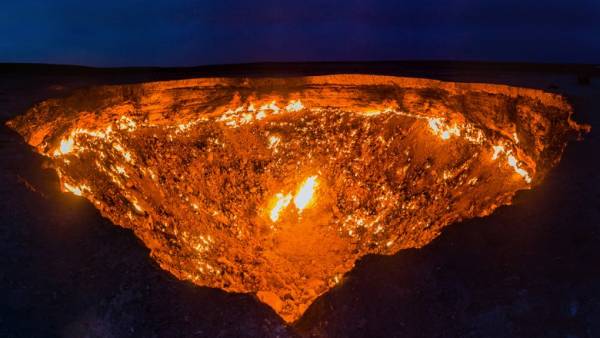 President of Turkmenistan Gurbanguly Berdimuhamedov announced plans to extinguish the burning gas crater “Radiance of the Karakums” in the Karakum desert. According to the leader of the state, this popular tourist attraction, also known as the “Gates of Hell”, causes serious damage to the environment, human health, as well as the country’s economy, as a resource from which it would be possible to profit is wasted.

The Darvaza gas crater, officially called the “Karakum Radiance”, was formed in the middle of the vast Karakum Desert in 1971. During the exploration of a gas field, geologists came across a void in the ground. There was a collapse, and a giant hole filled with gas about 70 meters wide and about 20 meters deep formed in the ground. Geologists decided to ignite the escaping gas in the hope that it would burn out in a few days, but their calculations turned out to be incorrect, and the crater has been burning continuously for 50 years.

Over the years, it has become a popular tourist attraction, but local authorities have repeatedly attempted to extinguish it. In 2010, Berdymukhamedov called on specialists to find a way to extinguish the flames, but this issue still remained unresolved.

The president appointed Deputy Prime Minister Shakhym Abdrakhmanov, who oversees the fuel and energy complex, responsible for extinguishing the crater, writes The Guardian.