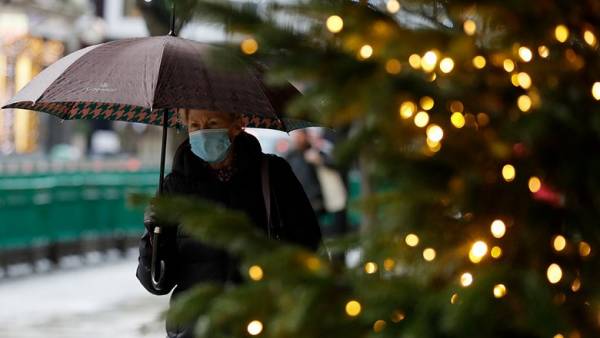 New Year’s holidays turned into a sharp spike in the incidence of COVID-19 all over the planet. According to the Our World in Data resource, since the beginning of last week, more than 2 million new cases of infection have been recorded daily in the world, although, for example, until December 25, this figure did not exceed 1 million. On Friday, amid the rapid spread of the omicron variant, the number of reported cases of COVID-19 in the world exceeded 300 million. Dozens of countries (including the United States, Great Britain, Greece, Italy and France) broke records for the number of cases last week.

Healthcare systems are in a difficult situationThe USA and a number of European countries. According to Reuters, due to the surge in morbidity and the fact that many doctors were forced to go into self-isolation, almost half of the American states suspended planned operations in hospitals.

Private medical companies inBritain has been on high alert since Monday. Earlier, the British government concluded a multimillion-dollar deal with them, according to which they undertake to mobilize maximum resources for the treatment of patients with serious diseases unrelated to coronavirus. The day before, due to a shortage of personnel, the military began working in British hospitals. There are similar problems in Italy and Spain.

COVID-19 does not bypass anyone, including political leaders.

According to the Italian newspaper Corriere della Sera, three members of the country’s government, including Foreign Minister Luigi Di Maio, were infected with the virus during the Christmas and New Year holidays. On Sunday, it became known about COVID-19 from a member of the US House of Representatives, Alexandria Ocasio-Cortez (and this despite the fact that she was revaccinated in the fall). At the beginning of the year, the President of Mauritania, Mohammed Ould al-Sheikh al-Ghazouani, was also among the infected, the disease passes in a mild form.

Egyptian Foreign Minister Sameh Shoukry, whose illness became known on Sunday, also has no serious symptoms. The minister’s condition is stable, and, according to local media, he monitors the work of his department. The Egyptian Foreign Minister is not the only media person in the country who has caught the coronavirus in recent days. Among the sick are famous politicians, journalists, artists and athletes. Egyptians are particularly worried about the news about infected football players, as the African Cup of Nations began on Sunday. This is Africa’s largest international tournament among national teams held every two years. Last year, due to the pandemic, the tournament was postponed to the beginning of 2022. They were afraid of the transfer this year, but everything went well, although there are sick football players in many national teams.

Although winter holidays in different countries of the world have already passed under serious restrictions, governments are already thinking about the next steps. The authorities act the harshest of allChina, where the opening of the Winter Olympic Games is expected in less than a month. Under the threat of the first local outbreak of “omicron” on the eve was the large Chinese port city of Tianjin (located 150 km from Beijing). On Sunday, the city authorities began mass testing of the population. Although the number of cases detected there in recent days has hardly exceeded a hundred, on Monday a complete lockdown was introduced in some areas of Tianjin: residents were forbidden to leave their homes. In addition, the movement of trains and buses on the Tianjin—Beijing route was stopped. These measures are being taken in accordance with the “zero tolerance” policy for COVID-19, which was proclaimed by the Chinese government.

In Europe, the restrictions are primarily aimed at increasing the level of vaccination. So, inItaly has been expanding the use of electronic COVID certificates since Monday. Now Italians will be required to present them, including when checking into hotels, as well as for traveling on public transport and visiting outdoor restaurants. InGreece, from February 1, will be banned from visiting closed premises for citizens who have not received a third injection of the COVID-19 vaccine. The French authorities are preparing to take an extremely unpopular measure: last week, the lower house of the country’s parliament approved a bill on “vaccination passports”, which the President of the republic Emmanuel Macron actively insisted on.

As before, not everyone is happy with the efforts of Governments to combat the pandemic. On Saturday, a total of more than 100 thousand people took to the streets of French cities to protest against compulsory vaccination. There were also tough clashes with the police. In Paris and Montpellier, law enforcement officers used tear gas. And on Sunday, at the hands of anti-vaxxers, the French deputy Stephane Clerault, a member of the ruling party “Forward, Republic!”, suffered. During his speech to protesters in the overseas community of France, Saint Pierre and Miquelon, the politician was pelted with algae and pebbles.

A hybrid of delta and omicron strains was found in Cyprus

Demonstrations against anti-weed measures were also held this weekend in Belgium, Denmark and the Czech Republic. About 5,000 people marched in Brussels, 40 of them were detained. About 4 thousand demonstrators took to the streets of Prague. More than 45 thousand people took part in protests in a number of German cities on Saturday, the protesters demanded, among other things, to stop vaccinating children.

The Middle East is also restless. Dozens of people took to the streets of the Tunisian capital last week to protest against the “vaccination passport”, which has become mandatory in a number of cases since December last year. Among other things, people who do not have a vaccination card may be denied entry to banks, shops and shopping centers. The restrictive measures of the authorities provoked demonstrations in Lebanon as well. On Saturday, several hundred people gathered in the center of Beirut to protest against mandatory vaccination. And in Israel, for example, they do not arrange demonstrations, but dissatisfaction with endless queues for PCR tests for children who have not yet been vaccinated is pouring out in the social network.