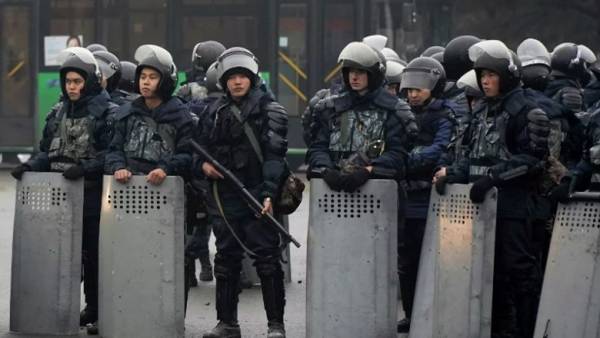 & quot; In & nbsp; Alma-Ata; began a large-scale cleanup from & nbsp; marauders and & nbsp; instigators of pogroms. The operation is carried out jointly by law enforcement agencies and the military. During the riots, the city suffered enormous damage. The radicals set fire to administrative buildings and & nbsp; cars. They smashed shop windows and & nbsp; ATMs. Marauders looted several of the largest shopping centers at once & raquo;, & nbsp; & mdash; the TV channel reports in & nbsp; its Telegram.

In & nbsp; then & nbsp; at the same time Sputnik Kazakhstan reports that & nbsp; & nbsp; the streets of the city are calm, there are no protesters.

Mass protests in & nbsp; Kazakhstan began in the & nbsp; early days of 2022. Then the inhabitants of the cities of Zhanaozen and & nbsp; Aktau in & nbsp; Mangystau region & nbsp; & mdash; oil-producing region in the & nbsp; west of the country & nbsp; & mdash; opposed a two-fold increase in prices for & nbsp; liquefied petroleum gas, then the protests spread to & nbsp; other cities. In & nbsp; Alma-Ata, the old capital of the republic, on January 4 and & nbsp; 5 & nbsp; there were clashes with & nbsp; security forces, the police used gas and & nbsp; stun grenades. All over Kazakhstan, the Internet was turned off, and a number of TV channels temporarily stopped broadcasting.