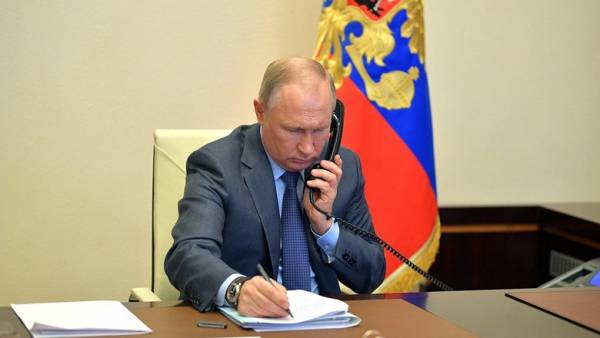 Ushakov said that & nbsp; during the conversation, Vladimir Putin detailed the main principles from & nbsp; Moscow's proposals on strategic security & nbsp; guarantees The aide to the president stressed that & nbsp; Russia “ needs a result '' and & nbsp; the Russian authorities “ will seek '' him.

As Yuri Ushakov clarified, Joe Biden mentioned in the & nbsp; conversation that & nbsp; in the & nbsp; case of the continuation of the escalation along the Ukrainian border, Western countries will impose “ large-scale sanctions against Russia along the & nbsp; economic, financial, and & nbsp; military sphere ''. “ But & nbsp; the president (of Russia. & ldquo; Kommersant & rdquo;) immediately & nbsp; & nbsp; reacted to & nbsp; by saying that & nbsp; if the West decides to impose these unprecedented sanctions, then & nbsp; all this could lead to a complete breakdown of relations & nbsp; between our countries, and & nbsp; will cause serious damage to Russia's relations with & nbsp; the West in general & raquo;, & nbsp; & mdash; told & nbsp; he. Ushakov added that & nbsp; the US President did not & nbsp; clarify which actions of Moscow could lead to & nbsp; sanctions.

The Presidential Aide also said that the US President had promised not to deploy offensive strike weapons in Ukraine.

Yuri Ushakov said that & nbsp; negotiations between the two presidents “ were frank, meaningful, specific. '' According to & nbsp; his opinion, “ in general, the direction of this conversation was quite constructive. '' He & nbsp; also noted that & nbsp; from & nbsp; the American side “ a desire to understand the logic and & nbsp; essence of Russian concerns was demonstrated. '' “ But & nbsp; I especially wanted to emphasize that & nbsp; this was not & nbsp; was some & nbsp; purely New Year's Eve conversation, some & nbsp; Christmas-time gatherings. I & nbsp; would say that & nbsp; exactly & nbsp; a day before & nbsp; a truly important, practical action took place, in which our and & nbsp; American presidents played their roles & raquo;, & nbsp; & mdash; said Ushakov. He & nbsp; added that & nbsp; & nbsp; during the conversation, “ specific issues on the bilateral agenda were not & nbsp; touched upon. ” “.

The US White House reported that & nbsp; Joe Biden called on Putin to & nbsp; de-escalate tensions in & nbsp; relations with & nbsp; Ukraine. The conversation took place on the & nbsp; initiative of the Russian side on the eve of the upcoming talks with the & nbsp; USA and & nbsp; NATO, where Moscow's proposals on & nbsp; security guarantees will be discussed. They include the requirement for & nbsp; non-expansion of NATO to the east and & nbsp; on & nbsp; refusal to & nbsp; military cooperation with & nbsp; post-Soviet countries. The European Union called the requirements for & nbsp; non-expansion of the alliance unacceptable. US Ambassador to & nbsp; RF John Sullivan in & nbsp; interview to Kommersant also criticized a number of proposals of Russia.