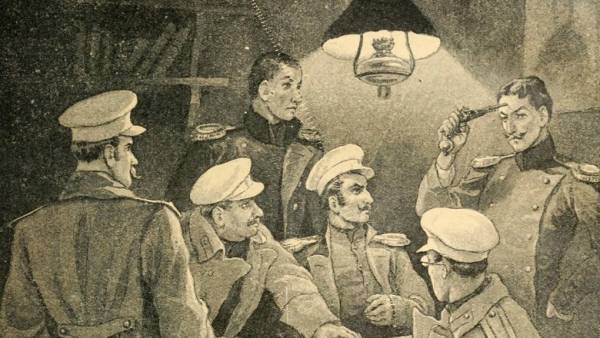 This extreme game is really Russian in origin. According to one version, it originated in the XIX century in places of detention: guards forced prisoners to shoot themselves in turn and made bets on who would get the only cartridge. According to another version, the game was invented by Russian officers in order to test themselves for bravery and show prowess to others.

For the first time the term “Russian roulette” is found in the American magazine Collier’s Weekly in 1937. Russian Russian George Surdez describes this extreme fun from the words of a French sergeant who served in the Russian army in Foreign Legion: “Have you ever heard of Russian Roulette? When I said I hadn’t heard, he told me all about her. Russian Russian officers believed when he served in the Russian army in Romania, around 1917, when everything was falling apart, that they were losing not only prestige, money, family, country, but also honor in the face of the Allies. Some of them, sitting anywhere — at a table, in a cafe, with friends- suddenly took out a revolver, took one cartridge out of the drum, twisted it, put the muzzle to their head and pulled the trigger. The probability that there would be a shot and the officer’s brains would scatter everywhere was five chances out of six. Sometimes it happened, sometimes it didn’t.” A game similar to Russian roulette is described by Lermontov in “The Hero of Our Time” – the story “Fatalist”. Nowadays, the phrase “Russian roulette” also has a metaphorical meaning: it’s something risky, dangerous and a little crazy.